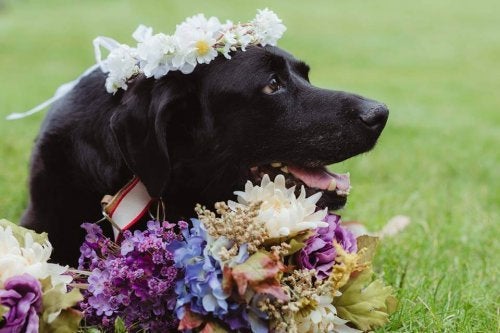 It is often said that life is made of little moments. Moments that can bring us varied and, sometimes, conflicting feelings. They also say that a pet’s love for their owner is unconditional. Well, we are going to talk about these topics and more in this article. This is the story of Charly Bear, a dog with a brain tumor, who survived to see his owner, Kelly O’Connell, get married.

The encounter between the veterinary student and the abandoned puppy

The first encounter between Charly and Kelly had happened 15 years ago. Back then, she was 19 years old and was at veterinary school in New York. She also worked at a shelter for homeless animals.

One day, they brought Charly Bear to the shelter. Barely 12 weeks old, somebody had abandoned the puppy in a shopping cart in the middle of winter.

When Kelly saw him, a Labrador Retriever mix, she knew that they were meant for each other. So she decided to adopt him, even though she didn’t plan on having a pet. Sometimes life is full of surprises.

A cancer diagnosis in the middle of organizing a wedding

The story of Charly and Kelly went on. Some time later, they moved to Colorado. There, she met James Garvin, a coworker who she started a relationship with in 2010.

Everything was wonderful for Kelly and James while they planned their wedding. But suddenly, last spring, Charly Bear had a convulsion on a walk.

They immediately did different tests on Charly, and it was not good news. He had a brain tumor. And the prognosis did not look good.

Putting down a pet, a difficult decision

Since the convulsions continued and they couldn’t promise a good quality of life for Charly, Kelly and James decided to put him down to prevent more pain and suffering.

The day of the wedding was getting closer, and having to euthanize a loyal companion of so many years was a huge blow to them. But seeing their beloved pet suffer was also heartbreaking.

However, a few days before the ceremony, the animal started to show signs of improvement. So, the couple decided to postpone putting him down.

Charly, the dog with a brain tumor that didn’t want to miss his owner’s wedding

That is how Charly Bear, the dog with a brain tumor, was able to go to the wedding of his adored owner.

Kelly is convinced that the dog did everything possible to stay alive until the wedding. He wanted to be able to accompany her on that very important day.

Shortly afterwards, the dog’s health rapidly declined. Then it was impossible to continue postponing euthanizing him.

A story that went public and moved many

But if it hadn’t been for the photographer hired for the party, the story of Kelly and Charly would have remained unknown, like so many other stories of unconditional love between people and pets.

Jen Dziuvenis was deeply moved when she saw the woman and her dog and heard the details about the animal’s disease. Therefore, she asked for permission to publish some photos on her website and social media.

That was how the news about the dog with a brain tumor that gathered up his last energy to go to his owner’s wedding reached the media. It is almost impossible not to be touched by the image of the bride’s sister, Katie Lloyd, carrying Charly, already with no strength left, in her arms.

Source of the images: Facebook of the photographer, Jen Dziuvenis