Dog With Broken Leg Runs 3Km to Save Puppies

The maternal instinct is reflected in many species of mammals 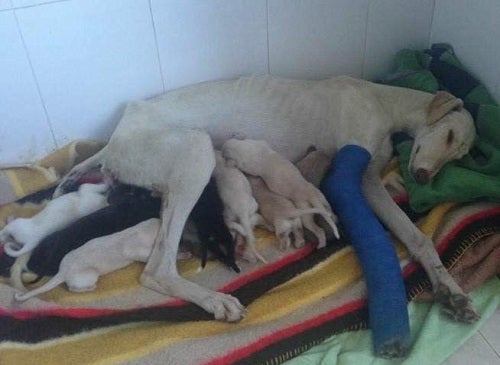 Of course, a maternal instinct stretches across all corners of the animal kingdom. And, it draws our attention when the story involves those that could be our pets. Therefore, in this article, we will tell you about a dog that walked 3 km to save puppies. Then we will also share other stories that are just as exciting.

A dog wuns 3 km looking for help for her puppies

The event occurred in Almeria, Spain. This dog had given birth to no less than 10 babies. Because of its notable signs of malnutrition and carelessness, it was obvious that it lived on the street. As if that were not enough, it had a broken leg. But to save its puppies it did not hesitate to walk 3 km demonstrating once again the courage, strength and kindness that dogs have.

At the Turre Veterinary Clinic, the doctors were amazed by the appearance of a malnourished dog, injured and with signs that it had become a mother very recently. It wanted to be followed.

The men walked next to it following its slow and aching pace until 3 km later they found something even more amazing: 10 precious newborn puppies. We cannot know how the dog managed to give birth to so many dogs, feed them at least one day, walk with a broken leg, seek help and return to hiding … The only thing we can guess is that it is, without a doubt, an incomparable demonstration of motherly love.

Both the dog and her babies were taken to the veterinary clinic where they were offered all the necessary care.

A little dog saves her puppies from a fire

This story takes us to the Chilean city of Temuco. There we can talk about a “heroine” named Amanda, who saved her five 10-day-old babies so they would not die in a fire.

According to the local press, the dog was responsible for taking its puppies one by one to the firetruck in charge of fighting the fire that affected a house in the Santa Rosa neighborhood. Amanda braved the danger to take its babies in its jaws and move them to a safe place.

Only one of the five puppies was in critical condition due to burns to the mouth and abdomen. The others had not even been touched by the flames. Once they arrived at the veterinary clinic, the mother stayed next to its injured baby without sleeping until it recovered.

Dog rescues its children from a flood

This third story of canine motherly love takes us to Israel. The dog in question saved her 12 puppies. The children were trapped in a building under construction that had flooded because of rainstorms. The babies were under rubble and in a place that no one could access.

Of course, the dog did not hesitate to sneak into a space where almost no one could fit to bring out its children one by one. The people who were nearby helped it by removing heavy material. Despite considerable effort on the part of the mother, she was able to save seven puppies.

Dog rescues its children from a flood (II)

Finally, another story where a dog does everything possible to get its young out of a dangerous and deadly place. The event happened in the Indian city of Chennai. For several weeks, it had rained heavily, and the areas being flooded led to the evacuation of thousands of people.

The dog had to swim around the rubble, garbage and all kinds of objects. But it was able to save its four puppies from drowning. The mother had to repeat the journey in order to rescue its babies one by one. The good news is that they all survived and were taken to a dry area.

Sources of the images: www.20minutos.es