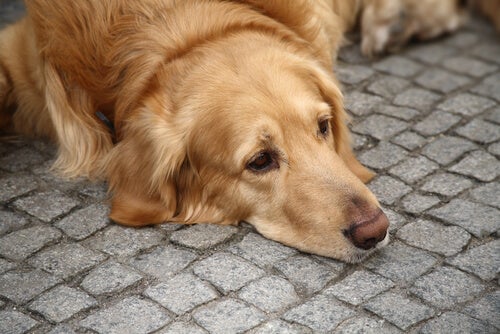 Sure, it may seem like a disorder that’s unique to the human condition. But, in reality, dog depression is a very real thing. For instance, your furry friend cannot talk to you about how they feel. However, if you look closely you will notice that they actually display symptoms of depression that are very similar to what affects humans. But, why do dogs get depressed? The causes can, of course, be very diverse. Here, we’ll take you through a number of possible ones.

What are the possible causes of dog depression?

First, dog depression can begin with endogenous causes (that is, not attributable to any external factors). But, the causes are more often to be found in the dog’s environment.

In addition, changes in the weather can also cause your four-legged friend to suffer from depression.

Dogs can suffer from depression just like humans do. Although in some cases, the causes may be internal. However, it is most often caused by traumatic situations in the dog’s environment, or by inappropriate treatment by its owner.

Other causes of depression in dogs

But there are also deeper, less tangible factors that can cause dog depression. In these cases, the responsibility lies with the owner for not taking proper care of their pet and making sure their mental wellbeing is looked after. Some examples include:

Get to know the signs that your dog may be depressed

Although, as we mentioned, the signs of depression in dogs are often similar to those shown by humans with the condition, some of them may be easily confused with symptoms of fatigue or even just of boredom. That’s why you should pay close attention to your dog’s behavior, because if depression is not detected in good time, it can be become debilitating for your dog.

Among the common signs of depression in dogs are:

Other signs of canine depression

Some other possible signs of depression in your dog include:

Now that you’ve read some of the common warning signs, you’ll be better able to monitor your dog’s behavior. If you’re in any doubt as to whether your four-legged friend is developing this condition, it’s better to go to the vet straight away to make sure, and get advice as to how to deal with the situation in the best way possible, and get your beloved pet on the path to recovery.