Your Dog’s Personality According to its Sleeping Style 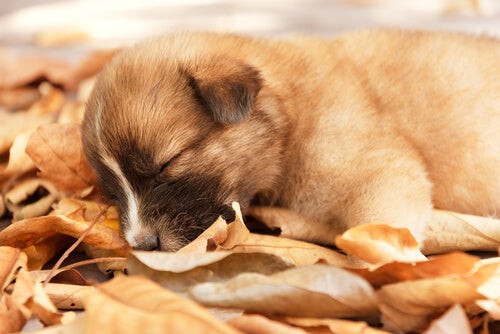 That dogs sleep — and nap — a lot is not news, but have you noticed in which position your furry friend normally sleeps? Pay attention because its sleeping style can speak strongly to the personality of your dog and how confident it feels with you and its environment.

Information about dogs at bedtime

It is very important for our four-legged friends to sleep well.

The time that a dog spends sleeping varies in relation to its size, its age and the physical activity in which it participates. On average, dogs need between 12 and 14 hours of sleep.

Adult dogs usually sleep about 8 or 9 hours and then take several naps during the day.

On the other hand, since they spend a lot of energy, puppies spend a good part of the day in the arms of Morpheus (around 18 hours).

The position that a dog adopts while sleeping can say many things about its personality. We’ll give you some explanation.

Your dog’s personality is revealed by its sleeping position

But beyond the numbers of hours a dog sleeps, the position in which it sleeps can tell you some things about your dog’s personality.

Below, we detail the main positions that dogs usually adopt while resting and their possible meanings.

When a dog sleeps on its side, it means that it is comfortable in its environment and sure of itself. It is a comfortable position, which denotes that the animal feels happy and carefree. But it also means that it trusts you and is very loyal.

Additionally, sleeping on the side is also a fairly common position for stray dogs that, unfortunately, have become accustomed to not having a home. For this reason, they have developed the ability to feel comfortable anywhere.

One of the most common ways for dogs to sleep is curled up so that they maintain their body warmth. It is also a way to protect their vital organs and other parts of the body, like the throat.

If your pup is one of those who snuggles while sleeping, it is surely a docile and congenial animal.

The dog that sleeps on its back and sprawled out is an animal that feels relaxed and sure of itself and its surroundings.

Keep in mind that when a dog is upside down, it is in a vulnerable state. And if it sleeps in this position, it is a happy and confident dog and absolutely convinced that nothing bad can happen to it in the place where it is.

This is the position that a dog usually adopts when it is not sleeping very deeply. That’s why a dog usually sleeps belly down when it takes a nap. This way it is able to have one ear alert to what is happening around it.

Dogs that choose this position are usually sweet and timid. But they are also creatures with a lot of energy, who are always ready to play and to take walks.

This passed-out position is one that can be seen in dogs that are highly active throughout the day or in those that are very hot. They lie on their backs to cool down more quickly.

In relation to their personality, they are secure and relaxed animals that adapt easily to different situations and environments.

Puppies tend to assume this position to rest when they have a lot of energy but are motivated and happy at the same time.

It consists of sleeping face down and with both the front and back legs stretched out, almost as if they were flying.

Other considerations regarding your dog’s rest

Regardless of your dog’s personality, keep in mind that in order for a dog to sleep well, you must make sure that it does enough physical and mental activity during the day. This can be achieved though:

Do not forget to cuddle him, either. So surely he will sleep feeling safe and happy.