No one likes to be alone and trapped inside an elevator. Much less if your a furry dog and you're lost! 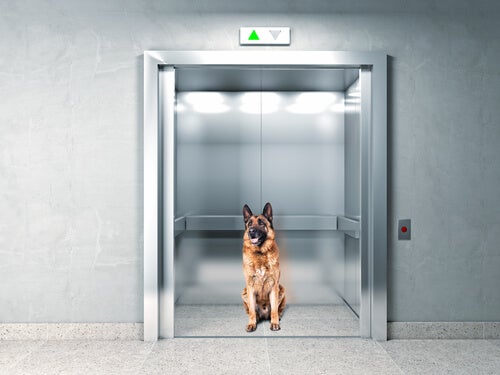 A dog did what a human would have done under this scary elevator circumstance. He pushed all the buttons, including the help one. Surprising, right? Maybe it’s just another example of animal intelligence.

It happened in the Torre Baró/Vallbona station, in Line 11 of the Barcelona Metro. The Security and Civil Protection Center of the metro received a call for help from an elevator that connects the street to the lobby.

However, when they connected the camera to verify what was happening, they found that the SOS call had been made by a dog.

The furry pet, wearing a collar, was apparently lost and disoriented when released from his temporary place of confinement. The City Guard finally came and took care of him, and we assume they returned him to his owners.

Have you heard about the dog who ended up stuck inside an elevator in the Barcelona Metro? The pup did what humans would do to get out: he pushed all the buttons he could reach.

The dog did what he had probably seen his owner do

The truth is that the dog did what he had surely seen his owners do countless times. He pressed the elevator buttons to open the doors. If people do it, why wouldn’t it work for him, too?

The thing is, our four-legged friends are great observers. And if anyone had any doubt, they are also very intelligent. Even scientific studies have proved what any attentive owner knows about his pet.

The Merriam-Webster Dictionary defines intelligence as the ability to learn or understand or to deal with new or trying situations. Is there any doubt that this definition describes a dog perfectly?

The intelligence of our four-legged friends

Research states that a dog’s cognitive abilities are very similar to those of a small child. For example, like infants, our furry friends manage to assimilate vocabulary by means of inference and exclusion. Some dogs can even relate abstract labels to specific objects.

But in addition to their natural intelligence, the dogs have been accompanying man for more than 40,000 years. It is normal that in so many centuries of observing us– and they sure have time for that– they know all our tricks. They know everything we do and how we do it, including pressing buttons in an elevator to open the door.

So, they have the ability to copy and imitate. In one of the many studies carried out, participating dogs had to push open a door. The animals were divided into two groups. One had to emulate humans. The other had to figure out how to open the door on their own.

The dogs who imitated humans learned much faster. The conclusion was that dogs tend to solve things faster when they see someone else do it first, instead of resorting to “trial and error”.

Adorable manipulators that can even push elevator buttons

In case all this wasn’t enough, our dear four-legged friends also know how to manipulate us. Have you already noticed or at least suspected that?

A recent investigation showed that dogs deceive us and change their behaviors according to their convenience. And they use stealth and dissimulation to get what they’re looking for. Besides, they understand very well what we tell them. Above all, they understand the way we tell it.

From a ethnocentric perspective, some say that the only thing dogs are missing is speech. Yet, they have their own language. You just have to learn how to interpret it, just like dogs learn to open doors, for example.