What Do Dogs Watch On TV? 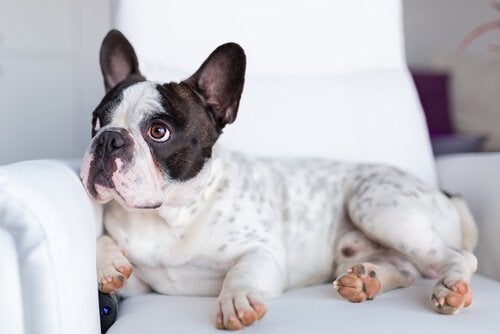 Have you ever wondered what a dog watches on TV? If you have a dog at home, you might see them watching TV. And it might seem that they are watching every little thing that flashes on the screen, especially if they see other dogs.

There’s a famous channel with “colorful” images that is uniquely designed for dogs. The producers thought of the best way to attract a dog – with relaxing and stimulating music to make your pet feel happy and calm.

In a nutshell, yes. Dogs can watch and react to images on the screen. And despite popular belief, dogs do not only see in black and white. They can see a wide range of colors, but different than those humans see.

How does this affect them? Well, dogs can recognize the images on the screen. They can even recognize and differentiate the animals that they have never seen in real life. This includes sounds, like barking noises on TV.

Studies have shown that dogs can accurately identify the images of other dogs when there are human and animals on the screen.

A dog’s eye is much more sensitive to movement than a human’s. So, when dogs watch older TV screens with fewer frames per second, they don´t really like it. In theory, they find the images much less appealing.

For dogs, watching older TV was like watching a flickering picture similar to watching an old movie. Of course, the personality and breed of dog plays a part. Terriers are an excellent example. A Terrier can react much faster to images on the TV screen than beagles do. Why? Because Beagles are more interested in following their nose than their eyes!

Most human programs or shows don’t make much difference to our pet when they watch TV. But, the problem is not the show itself. The simple reality is that it hasn’t been produced with a dog in mind.

Apart from the flicker rate, rhythm, sounds, and subject matter might not catch a dog’s eye or stir their interest.

A channel just for dogs

DogTV is a 24-hour channel that is uniquely designed for dogs, with no ads. Of course, it wouldn’t make much sense to show advertisements to dogs!

Thanks to this new channel, lonely dogs can entertain themselves with something fun to watch.

Studies have proven that dogs are interactive viewers and prefer certain types of shows. What we don’t know is if they really enjoy what they’re watching.

A dog’s interaction with technology is very different from our own. We can spend hours watching TV, but man’s best friend has a very short attention span. Usually, just three seconds or less.

Height is another important point to consider. TV’s are typically adjusted to our eye level, which is comfortable for us to watch when we’re sitting down. Of course, our pet may find it very uncomfortable to be looking up all day.

The best TV for dogs

The best or ideal TV should have a high flicker rate of 75hz or more, be placed at the dog’s eye level, and show programs with other animals, cats, birds, sheep, etc.

Through the eyes of a dog

Dogs can see in the dark much better than we can. Their pupil dilates much faster and absorbs more light. They also have a special mirror-like membrane layer to help improve their night vision. This layer is at the back of the retina and causes the dog’s eyes to glow in the dark when you shine a light on them.

A dog’s visual range is also different. Images that are less than 30 cm from their face appear blurred and out of focus. That’s why they need to smell everything!