The following facts are common to all Guinea Pig breeds, which are differentiated by their fur type. There are  even hairless ones that were prodcut mutation in a lab. 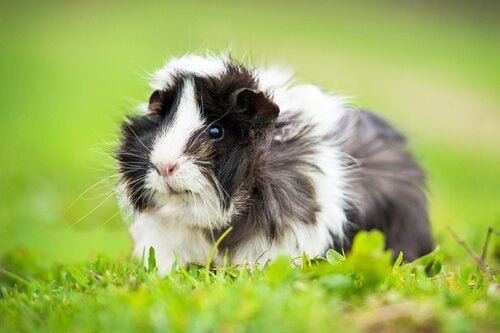 Guinea pigs are very funny medium-sized rodents. They are expressive, friendly, and considered to be great pets. Whoever has lived with one knows how special these animals are, but still little is known about them for most people. Continue reading this article to learn 8 curious facts about guinea pigs.

The guinea pig is a rodent that originated from the South American jungles. This animal has a docile nature and its friendliness is what makes them good pets all over the world. There are several guinea pig breeds that are differentiated by their hair type. The following curious facts are common to all guinea pig breeds:

1. They can sleep with their eyes open

Guinea pigs are fearful animals with many predators, so they are always on the alert. They have developed the ability to sleep with their eyes open so they can wake up when they sense any sudden movements.

Some guinea pigs always sleep with their eyes open, and others seldom do. If you have a new guinea pig at home, you may think it doesn’t sleep, but it probably does even though you can’t tell!

Unlike many other animals, guinea pigs cannot create vitamin C with a normal diet. They must consume all the Vitamin C they need directly through their diet.

Vitamin C deficiency produces scurvy, dental problems such as abnormal growth of the incisors, and eye problems. Therefore, it’s very important to take care of your guinea pig’s diet. Your guinea pig should eat foods that are high in vitamin C such as red peppers, spinach, broccoli, and strawberries.

A guinea pig’s digestive system does not move on its own, but rather continues digesting while the animal eats new foods. As these animals eat, they defecate their previous meal. Plus, just like all rodents, their teeth never stop growing.

Therefore, guinea pigs must always have food nearby because they eat small amounts throughout the day. Also, leave them hay in their cage, to help them with their digestion and maintain good oral hygiene by wearing down their teeth. l

4. Isabella I of Castile had the first guinea pig in Europe

When the Spanish conquistadors arrived in South America, it didn’t take long for them to find guinea pigs. One of them decided to take one and bring it as a gift to Isabella I of Castille, the Queen of Spain, who had made the voyages across the Atlantic possible.

5. They have many names

Guinea pigs have many names that are different in several countries. The best-known names are guinea pig or cavy, although they are sometimes called domestic guinea pigs or domestic cavies.

No one knows exactly why they are called guinea pigs. Most likely they call them  “Pigs” due to the noise they make, and because they look like piglets. However, they do not come from Guinea. Some people say that they were sold by a Guinean, which is where they get their name from.

There is a kind of guinea pig that has no hair. They are called hairless guinea pigs, or “skinny” pigs. They are descendants of a lab-guinea pig that was born hairless due to a mutation. Scientist reproduced a gene that made them lose their hair, and thus this breed was born.

They are normal guinea pigs, except they have troubles dealing with the cold in comparison to other guinea pigs. There are many other curiosities about guinea pig breeds, but this is the strangest.

7. They eat their feces

It may seem disgusting, but it’s true. Guinea pigs produce two kinds of feces, which only they can differentiate. They sometimes eat one of the types. They do so because it contains nutrients that are necessary for their bodies. Out of all of the curious facts about guinea pigs, this one is definitely the most unpleasant.

8. They are very intelligent

Guinea pigs can not only learn words and obey orders, but they also enjoy solving problems and learning new tricks. There are simple and fun tricks you can teach your guinea pig, but he can also enjoy toys and puzzles that make him think for a while.

Guinea pigs are small rodents that live comfortably in owner’s home. Understand how your guinea pig communicates, because they are very expressive animals. Don’t forget to give him bell peppers and enjoy his company for many years.