A New Opportunity for Picasso the Dog 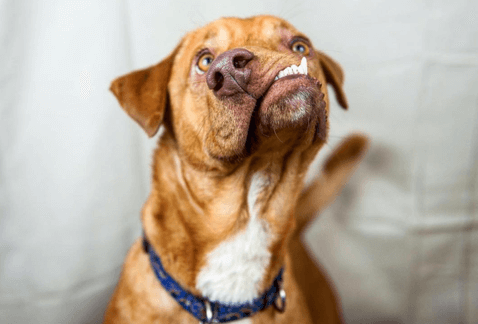 Picasso and his brother Pablo, were a litter of five puppies, born in a kennel. Here we will learn more about Picasso’s story.

There is a long list of dogs who are to be put down, and sadly Picasso’s name was also on this list. This can be because of different physical conditions or behaviors.

However, Picasso’s story has a happy ending. This cute dog, who is a Pit Bull and Terrier mix, is now famous on social media for his peculiar facial birth defect.

A New Dawn for Picasso the Dog

At just 10 months old, Picasso and Pablo were taken, along with a litter of other puppies, from the kennel where they were born. Picasso had malformations on the upper part of his nose.

The Porterville Animal Control center decided to put the dogs down. Although, in Picasso’s case, his physical birth anomaly will not prevent him from leading a normal life.

After the two puppies were born, the owner could see that Picasso’s face had a malformation.  It was a birth defect that would cause his jaw to move to the right, and his snout to the left. Because of this, the owner decided to abandon Picasso and Pablo in a shelter. Pablo is physically fit, but no one bought him.

The Porterville Animal Control center took both dogs and planned a lethal injection of euthanasia.

However, Picasso’s destiny would blessedly change forever. A woman was looking for a dog with a disability, because she knew that these dogs suffer the most when looking for a home.

Thankfully, and at the very last minute, the phone rang right before both animals were put down. The caller was Liesl Wilhardt, the director of the Luvable Dog Rescue organization. She wanted to know if there were any dogs available for adoption, with disabilities.

What’s more, her experience and track record means that Wilhardt knows the survival probability in pets with this condition, are low. The Luvable Dog Rescue organization only gave one condition: the two inseparable brothers must stay together.

Where is Picasso the Dog Now?

Since he has a chance at life, Picasso has become a social media revolutionary. He even went on record as one of the most popular dogs on Instagram. Thanks to a continuous smile and the tenderness he inspires, Picasso has not stopped touching the hearts of thousands of users, who see his photographs and videos each day.

We think it is important to reiterate that Picasso does not suffer from health problems, and his malformation is only aesthetic. He can eat with both sides of his mouth, even though it can be difficult and a bit messy at times. The same is true when he drinks water.

At this time, Picasso’s caretakers are planning for him to have surgery in order to correct a protruding tooth. This will prevent him from hurting part of his upper lip. Picasso’s physical deformity corresponds to the upper part of his nose. His jaw has no deformities and he can open and close it normally.

It is not uncommon for a dog’s front legs to continue growing after its other legs have stopped growing.  This can cause them to be different sizes.

The result of these deformities can be a bad alignment in the dog’s bones, in its joints, etc.

Dogs that have long limbs are more likely to suffer from bone deformities. On the other hand, dogs with short limbs tend to develop more joint problems.

As animals grow old, their deformities are more noticeable. To locate the abnormality, a veterinarian will take an x-ray of the animal’s entire limb. From here, the veterinarian compares the bone length to determine if joints and muscles are well aligned.

When a deformity is because of a genetic predisposition, breeding the dog is not recommended. If the deformity was caused by an injury, your veterinarian may recommend surgery to repair the damage. These operations usually involve eliminating abnormalities in the animal’s cartilage or bones. This is in order for the joint to return to its normal function.

Adoption: Are Two Dogs Better Than One?