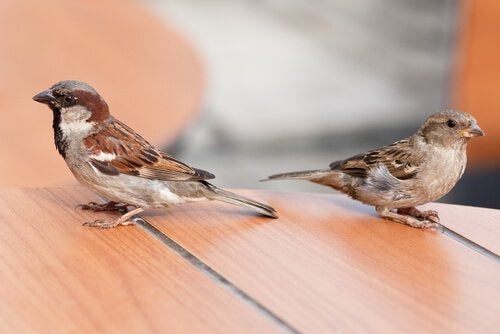 Although the number of house sparrows has decreased remarkably, they continue being part of the urban landscape in most of the planet. Continue reading to learn about this friendly and lively animal that moves and jumps around on the ground and other surfaces.

The Passer domesticus is a passerine bird from the Passeridae family, which originated from Eurasia and northern Africa. Humans took these birds to all continents except for Antarctica. Currently, they are found in mild urban areas worldwide.

Small but sturdy, the house sparrow has a life expectancy of 7 years, which can go over 13 years if it lives in captivity. The following are some of its main physical features:

Differences between male and female sparrows

The males are gray on their belly and a bit darker up top. In addition, they have a black spot on their chest and throat. Their crissum and tail are completely brown. Their wings are chocolate-colored with a white stripe and some black feathers. They have two chocolate-colored stripes from the top of the eyes to the neck and they have a black mask-like stripe on beak and eyes.

The females, who are smaller, are mostly gray on the belly and chest, and brown on the wings, tail, and crown; they also have a lighter supercilium.

Although they are part of the landscape of many cities worldwide, the number of friendly sparrows has decreased in recent years.

A bird accustomed to living with humans

Curious and intelligent are good adjectives to describe the house sparrow. With sedentary and sociable habits, it’s common to find them in the street, parks, and yards where it seems like they aren’t afraid of humans. You can also see them in vegetable gardens and farms.

It’s common to see them moving and jumping around quickly in these environment. They usually look for food in the waste humans leave on the street. They normal have a seed-based diet; these birds also hunt some insects, especially to give to their offspring.

Likewise, they can be seen grooming themselves and even taking some special powder baths to get rid of parasites.

Some facts about sparrow breeding

Every mating season, sparrows form monogamous couples. In the spring, they make a nest out of feathers, dry leaves, and scraps of paper inside of the cracks of buildings, under tiles, or inside trunks.

The female usually lays between four and five eggs at a time– they can have up to four lays each spring– which the couple needs to incubate for about ten days.

However, both mom and dad are responsible for feeding the chicks that are already feathered after two weeks.

The house sparrow is disappearing in cities

The typical postcard of the house sparrow next to humans in cities is no longer common. It’s estimated that 63% of these animals disappeared from Europe between 1980 and 2013.

The causes for this decrease in population is still under debate. For example:

Let’s consider that these friendly winged creatures are usually a great bio-indicator of a city’s health. So, the fewer amount of birds, the greater degree of contamination in the area. So for the good of the planet and humanity, let’s do everything necessary for the sparrow to make a comeback and repopulate our cities.