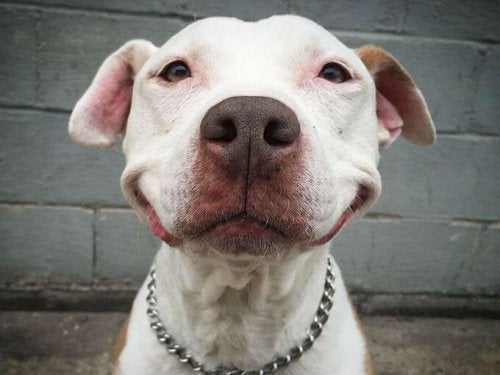 The attitudes people have towards pit bulls run the gamut. Stories in the media lately have been generating real animosity towards the breed. But we’d like to introduce you to Brinks, the smiley pit pull. He might change some minds…

The story of Brinks, the smiley pit bull

The stray pit bull was wandering around Brooklyn when he ran into a human and his dog. The man was Jon and his dog was Demo; the three instantly connected. Jon decided have Brinks stay with him as he tried to find his owner.

Months passed and Brinks’s owner did not appear. Therefore, Jon decided that he should keep his new friend. At the time, the dog was only 11 months old. But as you can see, he’s still smiling 12 years later.

Everyone who knows Brinks, the always-smiling dog, says that anyone who thinks that pit bulls are scary should meet Brinks. The really surprising thing is that Brinks smiles a lot in situations that humans would smile in. He’s smiling on purpose!

Jon says Brinks smiles if you give him treats, when he wakes up in the morning, and even when he’s sleeping. You’ll see him smiling anytime he’s happy, whether it’s in the car or sunbathing.

Is it normal for dogs to smile?

It has been shown that dogs do have the ability to emit special sounds and curve their mouths when they are happy, actions that scientists associate with human laughter. Experts confirm that the laughter you may have heard coming from your pup while playing may indeed be happiness.

We’re not so different. There are many emotions that we’ve always believed are unique to humans, but are actually seen in animals too. Love is one, and understanding of other creatures’ feelings is another.

This smiling expression in dogs is very similar to what we see on the face of a happy person. The angle of the mouth becomes more pronounced and stretches almost from ear to ear.

Do dogs laugh with sound?

The question of whether a dog who is smiling is also making noise has captured the attention of multiple researchers. Among them is dog behavior expert Patricia Simonet, from Sierra Nevada College.

The ethologist went to parks where dogs congregated “armed” with powerful microphones. The purpose of the experiment was to record the dogs’ laughter while they were playing and having fun with other dogs.

Her studies have led to important conclusions. How dogs pant when they play does not always sound the same. When they’re enjoying themselves, they produce a different, more choppy sound.

This sound is actually contagious for other dogs. It communicates joy and a desire for fun. What does it sound like? It’s like a choked gasp, a kind of “hhuh, hhuh” sound.

These recordings of dogs’ laughter were used in another experiment. A group of 15 puppies listened to them. The researchers were greatly surprised when they saw their reaction. The little ones burst out with joy just from listening to the recorded sounds of other dogs laughing.

The positive effect of laughter from other dogs is now being used in shelters and adoption centers. The happy sounds of other dogs help abandoned dogs feel better and less stressed as they wait for a home.

What does the smile mean?

The “smiling” expression does not necessarily indicate happiness. When the animal’s mouth is opened just a little, with a slight smile-like appearance, he may actually be anxious or nervous about something.

The distress signals that accompany a stiff smile may include heavy panting with their tongue out, whining, and the chattering of teeth. It is up to future studies to determine when the canine smile means happiness.