Differences Between a Donkey, Mule, and Ass

Although they are easily confused, these species aren't the same. Some of them are more suited for farming, and jobs that involve physical strength, while others provide retinol. This substance, which comes from their milk, has regenerative properties that keep our skin from aging. 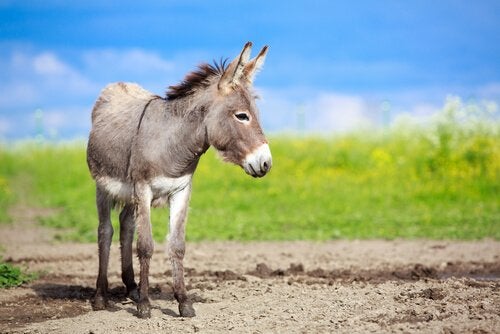 Although many people get them confused and talk about donkeys, mules and asses as if they were the same animal. The truth is that there are some noticeable differences between them.

Donkeys, Mules, and Asses– are they the same?

To keep it simple, donkeys and asses are the same animal, a mammal from the Equidae family. The mule, however, is completely different from the other two. It’s the outcome of crossbreeding a donkey and a mare.

Due to donkeys and mules being very useful to humans, it’s important to know how to tell them apart later on in this article.

Uses of the donkey

Although there are two types of donkeys, one is considered domestic and the other wild. The donkey that most people know about is the domestic donkey.

The donkey was domesticated just 5,000 years ago for farming. Due to its good physical performance and high resistance to dry, hot conditions, the domestic donkey is still used in some countries. It’s mainly used for loading and riding. However, they have been disappearing in industrialized nations.

Although males were once popular because they are capable of carrying heavy loads, nowadays the female donkey gets all the attention because its milk contains retinol, a substance that has the ability to prevent cells from aging.

They say that Cleopatra already knew about the properties in donkey milk, and that she bathed in it to stay young and beautiful.

The truth is that the pharmaceutical industry is currently making anti-aging cream from donkey milk. It not only contains antioxidants, but it also has regenerative properties. People also consume it the same way they do with cow’s milk, but this has only been a trend just like soy milk and almond milk.

Traits of the donkey

Although it seems unbelievable, one of the distant cousins of the donkey is the rhinoceros. They are both ungulates, which means they are hoofed mammals. Plus, the donkey is an herbivore that eats herbs, shrubs, plants, and thistles.

The domestic donkey con reproduce year long, unlike wild ones that can only do it when the weather is humid. If it is over two years old, the female can give birth to a single calf after a 12-month pregnancy. The calf weighs approximately 40 kilos and will breastfeed for two months.

Traits and uses of the mule

The mule possess much more physical strength and endurance than its parent, the donkey. That’s why it was so important for farming and industries of the nineteenth century.

Mules are commonly known for being sterile. In other words, since donkeys and mares have different numbers of chromosomes, a chromosomal error makes it impossible for mules to have offspring.

The chromosome difference of its parents also causes premature aging in the mule. It can live as long as a horse, but it has a very old appearance.

The reason for these deficiencies of this chromosomal combination is because the hinny and the mule were created by man. In other words, they are artificial species. Also, between the two species, the mule is considered to be the better hybrid.

Finally, because it has inherited the strength and endurance from its father, the mule is useful for cargo and transportation. Another interesting fact about the mule is that it has the unique long ears and short head of its father.

However, what will definitely differentiate the mule from the donkey is what it inherits from its mother, the mare: it has her height, teeth, and fur of just one color. Hopefully, with all of this information, you’ll have a better understanding of the differences of the donkey, mule, and ass.

Link copied!
Interesting Articles
Animals
Stress in Rabbits: How to Deal With It