The Clumber spaniel breed is pretty large, but they are so friendly and good-natured that they can make anyone fall in love with them. 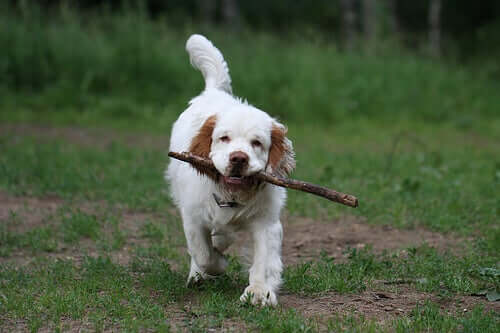 While there are no records of this breed existing before the 19th century, it’s believed that Clumber spaniels were around in France after the French Revolution.

The Duke of Noailles gave his spaniels to the Duke of Newcastle so they couldn’t be slaughtered. Thus, in the gardens of Clumber – in Nottinghamshire – the first Clumber spaniels were born. However, another theory suggests that their origin is a mixture of English hunting breeds, such as the Basset hound.

Therefore, we don’t exactly know it’s origins, but we’re certain that the Clumber spaniel appeared during the 19th century in England.

This breed has balanced proportions, whose general appearance represents strength and seriousness. They are active working dogs with strong bodies, able to work for long hours.

They have square heads and wide noses, as well as droopy lips and triangular ears that fall slightly forward.  The fur on their ears is also slightly longer than the rest of their body.

They also have a deep chest that can reach the knees of the front legs, which are strong, straight and sturdy. They need a low tail. It used to be customary to remove their tail, but fortunately this is now forbidden.

They have a remarkable amount of fur, which is quite long and silky. The fur on its paws, ears and tail is slightly longer than the rest of their body. In general their fur is completely white with the occasional golden or orange spots.

The behavior of Clumber spaniels

This dog may appear heavy and lazy, but it has a lot of energy. While they can spend a lot of time relaxing with a sleepy-looking face, they have such a huge personality which you’ll see when they’re playing.

They’re well-suited as a family pet and they have heaps of character and are great with people. Clumber spaniels are patient and persistent, therefore you need to train them to be respectful and playful. They don’t respond well to strictness and punishments.

We need to understand that they aren’t guard dogs, as they are friendly with other dogs and strangers. They have a sweet and trusting nature. This doesn’t mean that they’ll be any less loyal to their owner or family though.

On the other hand, they’re stubborn, which adds to their persistent character. This is what Clumber spaniel owners find most difficult, as they’ll ignore you if they aren’t interested.

If they don’t want to go for a walk, they won’t go and will make it very hard for a person to move them. However, owners also claim that they can be easily persuaded with treats.

In the past, people have bred this breed irresponsibly; therefore Clumber spaniels have recurring health problems that need to be closely monitored by their owners.

Like most large dogs, they’re prone to hip dysplasia. Vets need to assess all problems resulting from dysplasia (from pain to paralysis in the hind legs). You can feed them chondroprotective enriched food as a preventative measure.

This dog breed is also prone to both inverted and everted eyelids. Like with hip dysplasia, a vet needs to monitor treatment or prevention.

The list of possible problems goes on, as hypothyroidism is common too. If your Clumber spaniel is lethargic, tires quickly and has a tendency to get fat, it’s best to have a check-up with the vet and rule out symptoms of a thyroid problem.

Finally, all long-haired dogs need a lot of grooming. You shouldn’t take them for a trim, but thorough grooming at the beginning of each molting season will help get rid of the dead hair, help regulate body temperature and prevent skin problems.

The Brittany Spaniel: A Sweet and Versatile Breed
The Brittany spaniel is a member of the gun dog group, and was originally bred for hunting birds. Today, we'll take a look at this breed in more detail. Read more »
Link copied!
Interesting Articles
Dogs
Find Out Why Dogs Bury Their Food