Do You Know Why Dogs Howl?

It's nighttime: the city is silent, and all its human inhabitants are safely tucked up in bed. And then you hear the dogs starting to howl 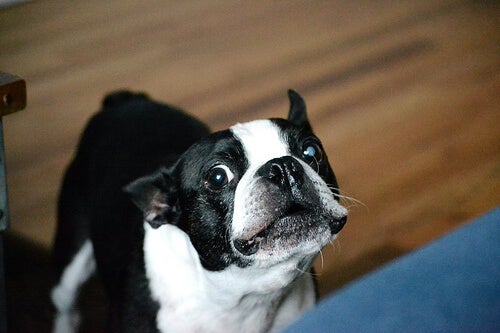 It’s an experience we’ve all lived through. First you hear one howl. Gradually, more and more dogs howl. They join the chorus from near and far. Then, so many dogs howl that they form a long line of communication. Of course, we have no idea what they are trying to say.

Dogs, as we all know, are descended from wolves. The most recent theories say that wolves that had less fear of people lived around villages and settlements, to take advantage of the rubbish they generated, which represented a valuable food source for the wild wolves. Humans eventually noticed that the wolves they saw prowling around their homes could be useful in the hunt. And, that’s how the symbiosis began.

So the howling of modern-day dogs is actually a leftover from wolves. After all, wolves do not bark. Perhaps, dogs learned to bark as they evolved. This may have happened because hunting dogs needed a way to communicate. They had to let their owners know where their prey was hiding. Today, humans pay very close attention to the sound of a barking dog.

In fact, there are some breeds of canines that still do not bark to this day. These are “primitive” dogs. This group includes Nordic breeds like the Samoyed, the Husky, the Malamute …. These dogs do, for sure, produce a range of different noises, but  barking is not one of them.

The call: why dogs howl

A howl is, at its most basic level, a call. Both dogs and wolves use them to find out where the other members of their family or pack are.

It is common for dogs that have a problem or feel distressed to cry out for help. Those who struggle with being left alone at home will frequently howl for their owners – even when those owners, of course, don’t understand the call or aren’t able to hear it. Dogs that get stuck somewhere or encounter a problem that they don’t know how to solve will do the same.

You’ll often see videos online of wolves howling to locate other members of their pack. Dogs do this too – and this is one of the reasons why, when a single dog howls, it often ends up being joined by all of its furry friends in the neighborhood and even beyond.

One dog will howl out because it needs help or wants to know where the other dogs are in the vicinity, and then other dogs answer it. Then, depending on how far away the answering howls come from, the dog that started off the “howl chain” can figure out if it’s alone or has canine company nearby.

In nature, this is how dogs and wolves would meet up with their colleagues. But nowadays, dogs are frequently confined in houses or gardens. So even if they can work out where the rest of the pack is, they won’t be able to meet up – unless they escape, that is.

Dogs howl out of instinct

Since they’re not strictly useful to the dog because of its lifestyle, we can say that its howling habits are simply down to instinct. So when a dog stops what he or she is doing and starts to howl, it’s not a voluntary action, but is based on ancient instincts.

In the same way, its desire to respond to another dog that it hears howling is instinctive. And it would be hard not to respond when the howling is heard clearly, as happens at night-time, when there are few other noises to distract from or mask the sound.

So, we can see that a dog that howls frequently is a dog that has a problem: it may be in pain, lonely or hungry. The dog has some specific need, and is asking for help in dealing with it.

There are many dogs that live in bustling cities that start howling every time they hear a siren, whether it be from an ambulance, a fire truck or the police.

This is another of the dog’s instinctive responses, and it happens because the siren in fact sounds very similar to a howl. From the dog’s point of view, that sound coming from the street sounds like another dog calling out for help – and that’s why they can’t help but respond, strange as it might seem to us. The only silver lining is that howling in response to sirens usually doesn’t last long, because the source of the sound disappears out of earshot very quickly, and there are usually a lot of other sounds that mask the noise as it decreases in volume.

So, now you know why dogs howl, and the reason why dogs create chains of howls at night, that might start far off and end up right by your window: it’s dogs comforting each other, letting them know they have canine friends nearby.

Finally, remember that howling is instinctive: it’s no use scolding or trying to silence a dog that howls. In short, howling is simply a matter of survival for dogs.