It's quite common to find overgrown premolars in guinea pigs that needs very careful treatment. Continue reading to find out more. 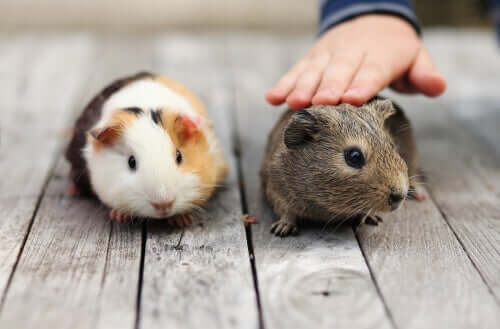 Guinea pigs (Cavia porcellus) can have recurring overgrown premolars on both sides of their jaws. These teeth grow and bridge the tongue, making it difficult to eat food and affects the animal’s day-to-day life.

Below we’ll tell you more about this interesting topic, so that you can be attentive to the health of your pet and detect when it’s time to go to the vet for a teeth checkup.

Dental problems in rodents are one of the most common problems at veterinary clinics that deal with smaller animals. And premolar growth is so fast and disproportionate that its prognosis is usually quite poor.

The first sign is that the guinea pig will approach food and smell it, but won’t eat it. Then it will make a very strange movement with its mouth, like it wants to swallow but can’t. And, because of this, it will also drool continuously and its breath will smell bad.

On examination, the animal will most likely have lost weight, and its pelvic bones will be visible. The corners of its mouth will be damp and it will be reluctant to have its mouth checked because it hurts them.

If this is the case, the animal will have to be sedated in order to explore the oral cavity easily, and see if the problem really is overgrown premolars. Other possibilities would be:

As a complementary test, an x-ray of the skull can be performed to determine the diagnosis and cause of the overgrowth. For example, oblique x-rays allow each side of the head and the right and left jaw bones to be seen. This will show the growth of the roots of the affected teeth.

Lateral x-rays show overgrown premolars. And a face-caudal x-ray will allow the temporomandibular joint to be studied and problems located.

Once overgrowth is confirmed, it’s diagnosed as an “acquired dental disease” that causes malocclusion and prevents the hamster from eating properly. By not feeding properly, the teeth won’t wear down as they should and it becomes a vicious circle.

Cutting and filing teeth is one way to treat the overgrown teeth in guinea pigs.

The guinea pig is first anesthetized, following the standard veterinarian protocol. The next step is putting on a mouth gag and a cheek separator, to have easy access to the oral cavity. Using a surgical file, the dental crowns will be filed down. And finally, the teeth will be trimmed with hemostatic forceps.

On some occasions, correctly filing down the dental crowns is better for the normal wear of the teeth and thus delays the reappearance of the problem.

Ensuring the guinea pig has the correct diet will help avoid overgrown premolars. Rodents are animals that eat a lot of fibrous vegetables to ensure the proper functioning of the mouth. This is similar to what happens when ruminants chew, crushing the vegetable and allowing proper wear of the teeth.

The biggest drawback is how poorly accustomed many pets are to eating foods that aren’t conducive to their species, usually due to the owners’ ignorance or stubbornness.

Overgrown premolars is a very common illness in guinea pigs that eat anything but hay or good feed. It’s often difficult to make the owner understand that these animals need a more balanced diet where fiber intake is the priority.

Ideas to Improve Your Guinea Pig’s Cage
Guinea pigs are social, appreciative, and expressive animals. They're happy with very little, but you can easily improve your guinea pig's cage and improve their quality of life. Read more »
Link copied!
Interesting Articles
Hamsters and Rodents
Causes, Symptoms and Treatments of Tumors in Hamsters