The European Hamster: A Mammal in Grave Danger

The IUCN announced the critical conservation status of the European hamster. Yet another species included in doesn't stop growing. 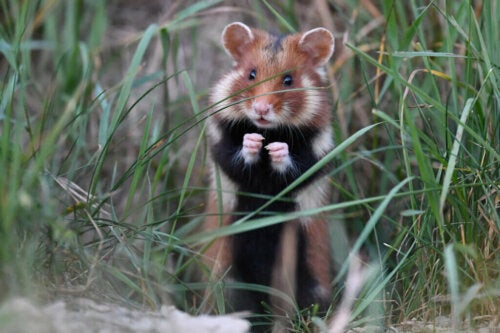 Recently, the International Union for Conservation of Nature (IUCN) published a new bulletin with an update of the conservation status of certain species. What’s most striking is the change in the status of the European hamster (Cricetus cricetus), which went from being vulnerable to being critically threatened.

This rodent is a relative of the Syrian and dwarf hamsters, and are very common, popular pets. Larger in size, the European hamster population has dramatically reduced, as well as its birth rate. Keep reading to learn more about the serious danger faced by this species of mammal.

Why is the European hamster in serious danger?

In 2018, the status of the European hamster was vulnerable. However, this has changed because over the last two years, their population is down by 50%.

Many people already know that this animal had less and less space to live in. In fact, in Vienna, they lived in cemeteries primarily, due to the spread of human beings and the lack of suitable land to reproduce and feed.

The number of this species has begun to decline so fast that it’s very likely to disappear before 2050 if nothing changes. In fact, some data suggests that they will be gone as soon as 2038. In recent years, this once very common animal has disappeared from at least 13 countries where it previously lived.

The low birth rate of the European hamster

In addition to the reduction of their habitat, the main cause of the disappearance of the European hamster is the drastic reduction in its birth rate. Since 1954, the reproduction rate of the hamster has gone down. For example, while, previously, a female produced 20 babies each year, now they typically only produce 4.

This has been going on for several decades, yet the IUCN didn’t change the species status from “low concern” to “critically endangered” until this year. In addition, they attribute the disappearance in Western Europe to modern agriculture, which causes a high mortality rate in this species.

As studies suggest, this mortality is not significant and it’s primarily the decrease in the reproduction rate that’s causing the disappearance of this species. However, we’re not just talking about Western Europe because in Eastern Europe the species has become extinct in eight regions and has become rare in 42 regions where it was previously common.

Causes of lack of offspring

Despite all the studies carried out to discover the cause of the decline of the species, the results aren’t entirely conclusive. Ultimately, it seems that a whole set of factors are causing the extinction of these little rodents.

However, if the mortality rate isn’t very high, why is there a low reproduction? To answer this question, we need to take a closer look into the reproductive cycle of the hamster and factors that lead to successful breeding. Like most rodent mammals, hamsters have a good reproductive mechanism that ensures their survival as a species:

However, changes in land use, habitat destruction and fragmentation, pollution, and climate change have reduced some European hamster populations so much that they are unable to regain their numbers.

The growth of human populations, which, little by little, destroy the natural habitats of many species, seems to be the limiting factor for this animal’s recovery. The European hamster has been included in a captive breeding and reintroduction program in the wild for years.

Despite this, the number of individuals doesn’t appear to be increasing. This is due to the scarcity of vegetation that leaves animals highly exposed to predators. Additionally, they don’t have any place to build their burrows or to roam safely in their habitat.

The disappearance of vegetation cover has left this rodent exposed so they have no way to reproduce.

Infant mortality is also high because young individuals don’t have enough time to stay hidden until they learn to flee from predators.

What is being done to save the species?

Experts are conducting conservation actions to try to save the European hamster based on two strategies. On the one hand, they’re conducting captive breeding and subsequently releasing them into the environment. However, this project isn’t beneficial if the animals don’t have enough space to survive.

To ensure that the habitat is increased and maintained, farmers are being subsidized to carry out various plans:

Saving a species from extinction isn’t just a matter of increasing the number of animals. It’s also about providing them with a place to live. It’s not too late to save the European hamster if we follow the recommendations and work together to achieve the same goal: to make the world a place where all species can live.