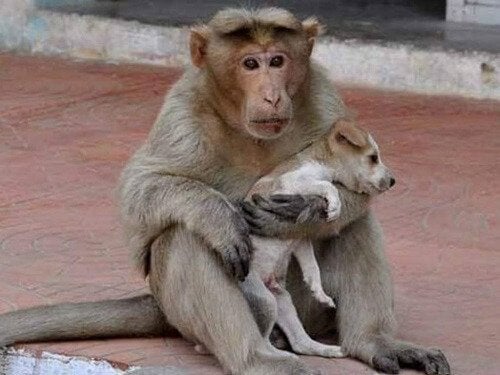 Friendships between animals of different species make such wonderful stories. When someone — human or animal — helps another who needs it, it’s a lesson to us all. The story we’ll tell you today is full of surprises, loyalty and tenderness. You are going to love it! Find out how a monkey and a dog became not only friends, but a family.

Many people say that animals are better than people. As with everything, we’re all different, but this monkey showed exceptional empathy, that’s for sure. Do you want to hear his story? We’ll tell you!

A monkey and a stray dog ​​become like family

It all happened in India, in a park where a certain monkey lived. Passersby and visitors would stop to watch him jump from one tree to another. However, one day the monkey created even more excitement.

Suddenly, he appeared with a new friend: a stray dog. It was a little puppy and the monkey adopted him as if he were his son. In fact, he looks for food for the puppy and won’t even eat until he makes sure that his “son” is well-fed.

When other stray dogs try to harm the poor puppy, the monkey defends him with his nails and teeth. There’s no doubt that he sees him as his own family. How could you deny it?

He holds him in his arms, walks him, won’t leave him for a minute and picks out lice and other parasites like any other primate mother does each day with his son. As for the puppy, he has no intention of separating from his “mother.” He knows that he will always be well-fed and cared for.

Those who have seen the sight describe the connection between them as the most caring thing in the world. The inhabitants of Erode, the town they live in, have taken it upon themselves to provide food for them both — something that will surely take some of the burden off of the kind monkey.

After all, not having to look for food for his “son” in addition to himself gives him more time to dedicate to the care and protection of his family. Once again, animals are teaching us lessons about what selfless loyalty, friendship and love mean.

This is just a small example of the friendship that can bloom between different species. Animals do not get carried away by appearances, but rather by their hearts and their feelings.

Here are other examples of animals who became good friends despite their differences: