Breeds of Rabbit: Field and Domestic

This species is an increasingly popular pet due to its affectionate character. They have a life expectancy of 7 to 15 years, a wide bracket since the environment and food are crucial. There are different breeds, some more isolated than others. 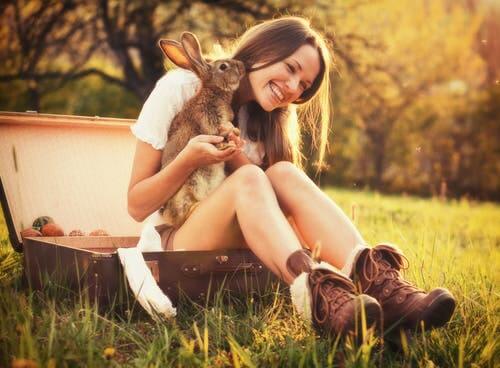 There are several important differences between the field and the domestic rabbit. From the type of breed and diet, to life expectancy. This ancient species started to become domesticated during the Middle Ages, and no matter their size, it’s one of the more popular pets. It’s important to learn more about the different breeds of rabbit, so we can give them proper care and attention.

Breeds of rabbit: field and domestic

The rabbit is one of the oldest animal species and its domestication began during the Middle Ages. At that time, these animals were already trapped and caged, and their meat became extremely popular. However, seeing the rabbit as a pet is much more impactful nowadays.

Those bred on farms or in captivity are generally defined as domestic rabbits, whereas field rabbits are wild creatures. The latter are usually less fat than the former because of the simple fact of living in freedom.

Recently, rabbits are becoming ever more popular as a pet, and more children are enjoying their company. Among other things, because they are quiet, easy to care for, and can form a strong bond with their owner.

Over the past few years a large number of domestic breeds have emerged, some of them in danger of extinction. This is largely due to human intervention, through crossbreeding different breeds and creating new breeds.

Dwarf bunnies are extremely popular among children. As the name indicates, they are dwarfs, that is, they barely grow bigger after two months old. If you’re interested in this type of species, you need to be careful because sometimes they’re sold as dwarfs when they’re not.

In these cases, it’s best to request a certificate. One aspect that differentiates dwarf bunnies is that their ears are usually a little smaller than other rabbits, which continue to grow normally.

These animals are characterized by very bright and long fur, as well as by the pointed shape of their ears. Anyone who adopts this breed of rabbit must take special care with the fur, as it can get knotted easily.

These rabbits differ from others because their long ears fall on both sides of their body. They are one of the quietest breeds, therefore they are favorites to adopt as pets. This breed needs special care with the ears, since they are so long that they can easily hurt themselves.

Differences between the field rabbit and the domestic rabbit

Although at first glance they may seem very similar, there are several differences between the field rabbit and the domestic rabbit. One of the main differences is life expectancy; while wild rabbits live between five and seven years, domestic rabbits can live up to 15.

In this sense, wild rabbits often suffer a lot of stress, and this is one of the main reasons why their life expectancy is shorter.

On the other hand, domestic rabbits, who are usually well fed and raised in favorable environments, live an average of 10 years, and can even live up to 15.

A rabbit’s diet also varies depending on whether it’s field or domestic. In the case of the former, they feed on herbaceous plants, lentils, and peas.

Hay and vegetables form an ideal diet for the domestic rabbit. This is to promote the natural wear of their teeth and to keep the digestive system as healthy as possible.

They may look alike, but there are important differences between the field and the domestic rabbit. It’s essential to know these differences to be able to address them according to their requirements.

The care of these animals is quite simple, although it’s necessary to know in-depth the needs of one of the most beloved species to humans. Good food, an adequate environment, and a lot of affection are the keys to having a happy pet.

The Difference Between Domestic Animals and Wild Animals
The differences between domestic animals and wild animals lies in the adaptation of their own functions, which are very distinct from one another. Read more »
Link copied!
Interesting Articles
Rabbits
How To Get Rid of Parasites in Rabbits

Rabbits are herbivorous animals, so feeding them is simple. For one, there's a wide range of food created just for…

More and more families are choosing to adopt a rabbit because they need less work than a dog. For one thing, they don’t need to go out for walks. However, they do need specific care,…

Rabbits
The Continental Giant: The Biggest Rabbit in the World

The Continental Giant, also known as the German Giant, is not a species. Rather, it's a very large domestic rabbit breed (Oryctolagus…