Green Iguanas - What Do They Eat?

Green iguanas usually have to go to the vet's because of skin problems and malformations that, in most cases, result from a poor diet. 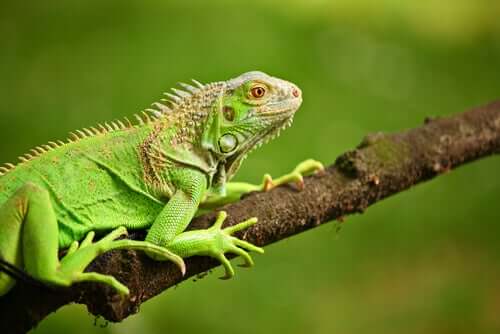 To begin with, green iguanas are members of the Squamata, the largest order of reptiles. Generally, you can identify them easily because their upper jaw is fused to their skull. Other animals that belong to this order are snakes, chameleons, and worm lizards.

They populate tropical areas of North and South America, from Florida to Brazil to be precise. Conversely, unlike the vast majority of reptiles, green iguanas are herbivorous animals. Thus, they specifically eat leafy greens. When in captivity, the iguana diet is very poor because we don’t know what the exact composition of their ideal diet should be. However, we do have some information that will bring good results when you apply them.

The diet of green iguanas

Iguanas in their natural environment feed primarily on the leaves of the trees in which they live. Thus, these leaves are their main source of fiber, protein and calcium, three essential compounds in an iguana’s diet.

Iguanas also eat flowers, and these account for almost 25% of the food these reptiles ingest daily. However, those who live in captivity also feast on fruit. Normally fruit is only part of the diet of around 3% of the iguana population, as the fruit is rarely available to them there.

For green iguanas to be healthy when in captivity, you should pay attention to several things.

Firstly, unlike carnivorous Saurus, green iguanas must eat every day. Likewise, you should remove any remains of food at night and wash their container with hot water.

In addition, the calcium-phosphorus ratio contained in their diet must be equal to or greater than 2:1.

Here’s a list of fruits and vegetables that an iguana can eat – the most acceptable ones are top of the list. The best fruit and vegetables, according to the above ratio, are:

Vegetables and fruits with an acceptable calcium-phosphorus ratio are:

Vegetables and fruits you should only use sporadically:

Other things to consider

In addition to food, the iguana should always have a container with clean water. Particularly, you must change their water often because iguanas, like other reptiles, tend to do their feces in it.

Wash any food you give them and chop it into small pieces to avoid mouth sores. Additionally, you can supplement your iguana diet with the iguana food you can find at pet stores.

Furthermore, it’s important to keep the terrarium at an average temperature of 86º F, with some areas at a lower temperature so that they can thermoregulate at will. Another very important thing is to give them plenty of opportunities for sun exposure.

You can take them out during summer so they can soak up some sun directly. However, don’t ever do so through the glass of the terrarium. Similarly, when you do take them out always make sure there are available shady areas and fresh drinking water nearby.

During the winter months, you can provide them with ultraviolet radiation by using a lamp that has a wavelength of between 290-310 nanometers. Because, if you don’t, the animal won’t be able to synthesize vitamin D3 and will end up with calcium assimilation problems, which could lead to their death.

Iguanas Lack Calcium and Vitamins
Because of their unbalanced diet and lack of contact with sunlight, iguanas lack calcium and vitamins, and we'll show you how to care for them. Read more »