The Life Cycle of Tortoises and Turtles

Tortoises and turtles have a fascinating life cycle and can live for many years. Sadly however, many don't reach adulthood. Read on to find out more about the life cycle of these amazing creatures. 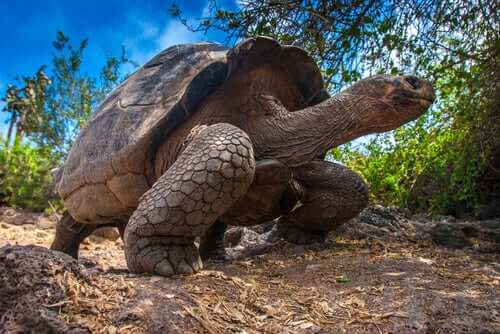 These reptiles are some of the oldest animals on Earth. They can live for up to 100 years. In this article, we’ll take a look at the life cycle of tortoises and turtles.

Both are reptiles, with tortoises living on land and turtles living in the water. Their physical features vary according to their habitat and species.

All of them have a shell and retractable head and legs. They can vary in size between 10 inches to 6 feet in the largest cases!

Tortoises have a lighter shell than turtles, and also have membranes on their legs. But despite the significant difference in habitat, their life cycle is the same: egg, childhood, and adulthood.

A fascinating journey: the life cycle of tortoises and turtles

The different stages can be defined as follows:

They generally nest in tropical or subtropical sandy beaches, however, some lay their eggs in water or mud.

The size and depth of the nest depend on the size of the animal. It consists of an oval space for the female’s body and then a deeper hole that they dig to lay the eggs.

The eggs take between 6 to 8 weeks to hatch.

The mother doesn’t stay with the eggs. Instead, the babies are left to hatch and fend for themselves. After the incubation period, they use a horn to break the egg, which can take two to three days.

Digging their way out

Once they’re out of the egg, the babies have to dig their way out of the nest. All the babies digging together causes the sand to collapse and helps them all to emerge on the surface.

At this point, turtles, who live in the water, will make their way straight to the ocean. They will begin the next stage of their life in the water and will go on to explore new territories and travel thousands of miles.

In the life cycle of tortoises or turtles, this is where the animal acquires their definitive physical features.

They’ll reach sexual maturity between the age of 10 and 20 years old. This is when the females will move to the beaches to nest, and they generally look for the same beach where they were born.

The male may bite the female’s leg or hit against her shell during reproduction.

In each cycle, the female may have between one and eight nests. Despite the fact that so many eggs are laid, it’s estimated that between just one and five in every 100 tortoises or turtles reach adulthood.

This fact shows just how tough the life cycle of tortoises and turtles is and explains why they are in danger of extinction.

Accidental capture and the destruction of their habitats are just a couple of the reasons why they are disappearing.

On the move: migration

Migration is an important part of the life of tortoises and turtles and it’s considered a way that they aim to ensure survival.

Their main migration route seems to be between where they eat and where they reproduce, but it’s not known whether the males and females always migrate together.

The first migration is when young turtles move out to sea, being independent from the moment they’re born. From this moment, they are in constant motion throughout their lives.

Tortoises and turtles have one of the highest life expectancies or any animal, and it can exceed 100 years depending on the species. The flip-side to this, of course, is that so many never reach adulthood.

Raising and Taking Care of Turtles
Taking care of your turtle is important to make sure that it's healthy including everyone around it. Knowing how to take care of a pet means understanding its body and fulfilling his specific needs. Read more »
Link copied!
Interesting Articles
Tortoises and Reptiles
Captive Care and Breeding of the Common Sandfish (Scincus scincus)