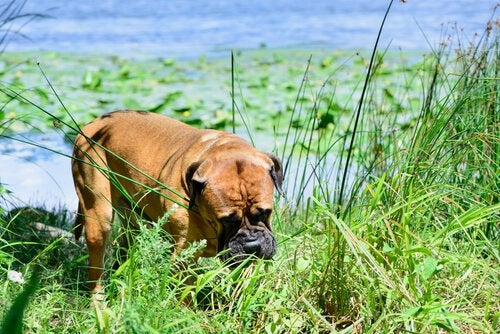 If you have a yard or if you take your dog to the park, you’ve surely seen him eating grass at least once. It’s not that it’s some kind of delicacy to dogs; rather they use it as a kind of natural medicine. There are also other reasons why dogs eat grass. So in this article, we’ll tell you the different reasons why dogs eat grass, and explain why it’s actually normal for them.

Perhaps you’ve asked yourself what the reason behind this “strange” behavior could be. If dogs are carnivorous — and they are — why do they eat grass like sheep and cows do? Believe it or not, their closest ancestor, the wolf, also has this habit. They love to eat green plants in the wild.

Even though some people don’t allow their dogs to eat grass, the truth is that, in the right amount, grass is good for your dog’s health. If your four-legged friend vomits after eating it, that doesn’t mean the grass did them harm. It means that it fulfilled its objective: to cleanse your dog’s stomach.

Even though the question of why dogs eat grass has not been ascertained, there are several theories that can help us. It may seem strange to humans, but in reality it has several logical explanations.

Do you want to know why dogs eat grass? Then read on for a few possible reasons you should know about:

Dog can’t go to the pharmacy and buy indigestion medicine or laxatives. What they do have at their disposal when their stomach hurts or they’ve eaten something that didn’t sit well with them is grass.

Dogs vomit or defecate after ingesting grass. In fact, it’s basically a home remedy for stomach and intestinal problems, so allow your pup to eat it.

As we mentioned, wolves also tend to eat grass quite often. While you may think it’s unusual or even somewhat neurotic, understand that your dog is just doing something he inherited from the period of time when his ancestors were wild. Actually, this isn’t the only habit dogs inherited, since both wolves and dogs walk around in circles before laying down to go to sleep, for example.

3. To Delight Their Palates

Who says that dogs only like meat? They also want to taste something more natural from time to time. Maybe if your dog is eating grass, it’s because what you’re feeding him is boring.

Dogs eat vegetables because they like the taste and because they feel good afterwards. It’s exactly what happens to you when you eat fresh produce and salads! It’s important for you to remember that dogs don’t eat just any grass they come across; they have preferences.

They look for the most tender shoots of a specific variety of grass. They are very intelligent when scouting for food and may spend several minutes sniffing around until they find the right kind.

4. To Satiate Their Appetites

Grass contains large amounts of fiber, which you know is good for satiating hunger. Therefore, if dogs feels their stomachs empty, they’ll look for something to take away that feeling. It doesn’t matter if it’s grass! What dogs care about is feeling satisfied and not having an empty stomach.

5. To Supplement Their Diets

Another theory to explain why dogs eat grass is that dogs know when they need to balance their diet. If you’re feeding a dog lots of carbohydrates, at some point, he’ll look for vitamins and minerals elsewhere.

Feeding your dog the same thing all the time damages his intestinal flora. This could result in a weakened immune system. In other words, your dog will get sick more often and have less energy.

Therefore, if you see your dog eating grass, first of all do not yell at him. Secondly, think about what nutrients he might be missing and change his daily diet a little.