In the face of humanitarian crises such as those brought on by the earthquake in Ecuador, sometimes it's the drama is overlooked of pets that die or lose their home due to this true tragedy. 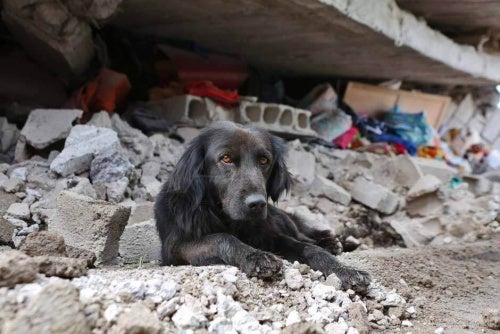 While the dogs’ loyalty for their owners is well-known, in extreme situations it’s usually even more evident. That’s why it’s no surprise to read news that show a dog that refused to leave his home, destroyed by the earthquake.

The story of Max, the dog that didn’t want to leave his demolished home

On Facebook, for example, a video went viral showing a puppy that stayed among the debris that was once his home, in Guayas, one of the provinces that was most affected by the earthquake.

As all of his human family, made up of three family members, had died from the earthquake, the nearby neighbors wanted to help him. But the animal refused to eat, and even drink, and returned again and again to the wreckageof his home.

In the middle of the tragedy, it can be said that the story had a happy ending, because finally the pet, named Max, was picked up by relatives of the victims and received veterinary assistance.

When these extreme situations occur, such as the earthquake in Ecuador, it’s not uncommon that stories are heard that a dog refuses to abandon his home and that he has stayed in the rubble.

Other dogs refuse to leave their homes in the wreckage: the case of Blackie

Nevertheless, the story of Max is not the only story in which a dog refuses to leave his home that has been destroyed by an earthquake.

Facebook  introduced us to Blackie, a dog that a photographer found. He found them among the debris of what had been where he lived in the San Martin de Porres neighborhood, in the Ecuadorian capital. Although in a lesser way, the consequences of the earthquake were also felt in Quito.

The man tried to get the dog to eat but the animal refused. Neither did he want to leave the area where before his home used to be. Days later the photographer returned to the same spot. The animal was still there, and on the second occasion, he accepted food.

In this case, the furry friend was able to find a new owner. And, in spite of losing so many material things, they both had one another.

Pets: the other victims of the earthquake in Ecuador

Although they’re not the center of attention, just as humans, many pets were lost from the earthquake in Ecuador. Others were rescued and some were lost and wandered around the disaster region. And also there are those that refused to abandon their destroyed homes.

For that reason, the Regional Dog Training Center (RDTC) authorized two shelters for animals affected by the catastrophe. The refugees find themselves in Monta and Pedernales, two of the most affected cities by the earthquake. There you’ll find a group of volunteer vets. And they receive donations that go to the different places to help pets.

Among the various tasks that the RDTC is moving forward to help pets include:

It’s worth point out, once more, that solidarity and love are are most evident in the face of extreme situations. And, in the case of domestic animals, it’s moving to see how neighbors that survived look for and protect pets that lost their human families.

We shouldn’t forget the selfless work of those volunteer rescue groups. They put their best foot forward to save a life. This is person, a dog, a cat or any other animal that needs help.