The Rumen, a Microbial Ecosystem Inside a Cow

The rumen is responsible for digesting complex plant compounds into simpler ones so the animal can assimilate them. That's why there's a symbiosis between the microbial ecosystem and the ruminant. 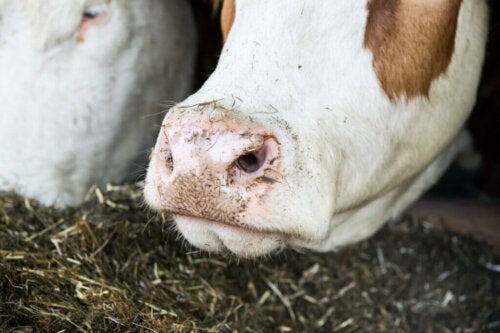 Ruminants feed on compounds that other species, such as humans, can’t digest. This is thanks to a wide diversity of microorganisms responsible for anaerobically digesting (without oxygen) these nutrients in the rumen, through a process called fermentation.

This process is necessary for the survival of many species of agricultural importance, such as cows. Today’s article will discuss what the rumen is and some of the microorganisms involved in this fascinating process.

Inside the rumen, thousands of microscopic beings produce enzymes that help digest plant fibers and cellulose. That’s why we say that rumen is a microbial ecosystem where bacteria comprise 60% of the microorganism population.

The rumen communicates with the mouth through the esophagus; these are the steps that food follows until its digestion:

These microbial communities produce enzymes with essential functions to break down carbohydrates (from cellulose, starch, and sugars), as well as nitrogen compounds and lipids. This decomposition happens through a fermentation process.

This process is essential for obtaining energy (in the form of ATP), for the growth of the microorganisms themselves, and for producing essential molecules for the animal, such as glucose. They’re also important in compounds that contain nitrogen, which is essential for protein synthesis.

The microorganisms themselves produce them inside and the animal’s digestive system obtains a source of energy without having to resort to external elements such as vitamin B or essential amino acids.

The rumen – a symbiotic relationship in an anaerobic environment

We must emphasize that, as you can see, the rumen is an example of mutualistic symbiosis: ruminants provide microbes with a suitable environment for their growth and activity. In return, the microorganisms provide nutrients to the host, which they couldn’t digest otherwise.

In this way, ruminants have a diet rich in fiber and low in protein.

This ruminal ecosystem consists of a wide variety of microorganisms. These establish a symbiotic relationship in an environment where there’s no oxygen.

This microbiota contains bacteria, archaea, protozoa, and fungi. Bacteria are the most susceptible to the physical-chemical properties of the rumen. The ones that dominate this community belong to two different philosophies:

The archaea comprise approximately 1% of the microbial mass, and as for the eukaryotes, there are protozoa. These comprise a third of the total and there are also some fungi.

Cows must properly digest cellulose, the main component of the cell wall of plants. Thus, cellulolytic bacteria are essential.

In this case, a pH lower than 5.5 affects the process of fiber digestion and a temperature of 39 degrees impairs the capacity of bacterial adhesion.

Amylolytic bacteria are also important due to the presence of starch in the diet of cattle and grain-feeding cows.

Lactic acid bacteria metabolize lactic acid and control its accumulation. Thus, they help keep the pH in the right range.

Finally, pectin-degrading bacteria also play a major role, since pectin represents 10 – 20% of the total carbohydrates in the diet of these animals.

The activity of microorganisms is the main source of greenhouse gases in agriculture. Methane is generated by methanogenic arcs and obtained as a final product of fermentation. Some consider it an energy loss because it represents 6 – 10% of the total energy.

This gas contributes to the greenhouse effect when it merges into the environment. During methanogenesis, the levels of CO2 and hydrogen in the medium decrease; this is good because it’s necessary. 80% of the methane is due to the fermentation of the fiber (cellulose) while the remaining 20% is due to the decomposition of the manure.

These microbes decrease the risk of acidosis following the consumption of foods that have a high concentration of easily digestible sugars.

The main function of 90% of the ciliate protozoa is to hydrolyze and ferment cellulose. The ciliate Diplopastron affine has amylolytic activity, with which it produces maltose and glucose.

Some cellulolytic fungi produce certain enzymes capable of hydrolyzing cellulose and xylans. Fungal activity promotes the digestion of the cell wall of vegetables.

These are important, above all, when ruminants ingest lignified substrates. For example, Neocallimastix frontalis solubilizes the lining in the cell walls so that bacteria can access the cellulose without problems.

As you can see, microorganisms are essential in the degrading metabolism of the food ingested by ruminants. So, this is one more example of the importance of these unicellular beings in the animal world.

Finally, we must clarify that this microbiota must remain in good shape to avoid physiological problems in the animal, such as acidosis.

What Are Ruminant Animals?
There are many types of ruminant animals. In this article, we'll tell you all about these animals and what makes them special. Read more »
Link copied!
Interesting Articles
Cows
The Belgian Blue and Its Muscular Appearance

Today we'd like to tell you about one of those words that's quite familiar to everyone. However, you may not…