Finally, The Fur Trade Is Coming To An End

In the fur trade, tons of animals have suffered while getting skinned alive. Even in a country as civilized as Denmark, more than 17 million mink skins are produced annually. 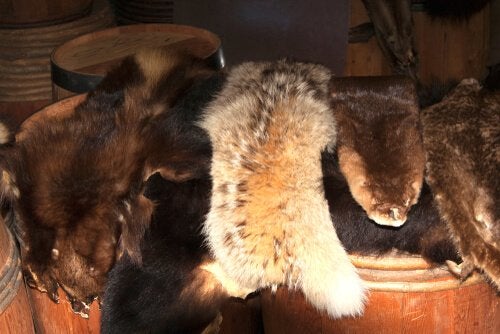 Fur has been used as a garment since the beginning of the history of mankind. However, the greed of making money from fur is an extreme case of cruelty which results in killing the animal. All is done in order to satisfy the human desire for extravagance, luxury, and profit. Nevertheless, there is some good news: the end of the fur trade is possible.

The influence of the fur trade on the world

The fur trade has become an important source of income worldwide. However, some nations stand out, such as Russia, China, and the Nordic countries (Sweden, Finland, Norway, and Denmark). In China, for example, 75 million dogs, foxes, minks and raccoons are killed for the sole purpose of obtaining their fur.

Many use the following statement from the first paragraph as an excuse: “Fur has been used as a garment since the beginning of of mankind.” However, our oldest ancestors did not kill the animals just to remove their skins, let alone skin them alive as people do today.

Either they hunted for food and took advantage of the hide, or simply waited for an animal to die naturally. However, human greed has reached unprecedented limits.

The United States, a pioneer in cruelty along with China, puts about 7 million animals to death a year to satisfy the extravagant desires of fur-loving people. However, a magazine called LAIKA reported that these figures will reach zero.

When interviewed, photographer Joanne McArthur said, “many people don’t know that animals are killed in order to make their fur coats.”

In one of her works she focused on this issues, she claims to have photographed at least 25 fur farms in Europe and Canada. Every time she sees a person wearing a fur garment, she thinks, “If you had seen what I did, you wouldn’t wear that coat.”

More information about the fur trade

Denmark produces more than 17 million mink furs a year. Needless to say, this small animal is one of the most sought-after and valued animals in this business. To obtain their fur, they breed them in very small cages in which they can barely move. We won’t even tell you about how they die in order to “give” their fur to this industry.

These animals are snatched from their natural habitat, in which they live alone near the water. They are instead piled up in dry farms, making them go mad to the point that they fight each other and even devour each other.

These are just some of the facts about what the fur trade is doing in several countries. It has not been stopped yet because money seems to be more important than the lives of these magnificent creatures.

We could go on for days talking about the farms, conditions the animals live, how they are treated, and how unsanitary their cages are, but there might not be enough space to go over this topic in today’s article. Therefore, let’s discuss something better: the end of the fur trade.

Finally, the fur trade is coming to an end

In today’s world where cruelty is no longer something to be proud of or tolerate. Many activists have gone to the streets to end the fur trade. Some companies saw this and came up with alternative methods, claiming that the animals would not suffer. However, all those who fight for this cause know that’s a lie.

How do you remove fur from an animal? Whether it’s torn off while they’re alive, or killed in order to skin it, how can you prevent an animal from suffering that?

Reputable companies like Giorgio Armani have already announced that they will no longer use furs in their clothing. They have stopped for two years already. For example, Calvin Klein already stated that furs were unnecessary, and stopped using them two decades ago.

There’s a long list of designers and large companies that won’t give a single dollar to this atrocity. Laws prohibit animal cruelty, and that’s what activists are trying to make the world see. They’re trying to pass more laws, and in many parts of the world, judges will declare verdicts in their favor.

In Norway, the government has given all fur farms and fur companies a six year period to close down. This is just the beginning– the end of the fur trade is near!