Several studies have shown that animals which hide, are better at socializing with humans and other animals.  Therefore, when it comes to cats, they feel more comfortable if they have access to hide in a small space. It also helps them regulate their body temperature during the summer and winter. 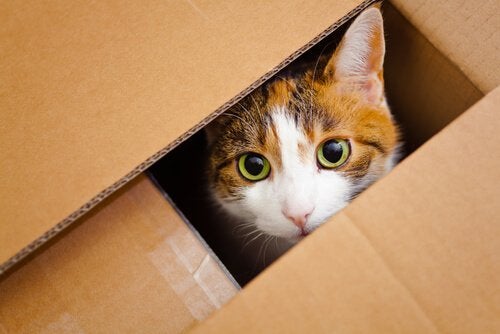 This has probably happened to you before. After bringing home an expensive new toy home for your cat, he shuns it and suddenly hides inside its box… Have you ever wondered why cats like boxes? If you have, then continue reading this article to find out why.

Cats have a great need to have control over everything around them. Therefore, upon coming across something new, or when they have troubles understanding it, they can get stressed out or show signs of self-destructive behavior.

There are several studies based on the feline behavior and their strange habits. Most of them have come to the conclusion that cats feel more comfortable in closed spaces.

Ethologist Claudia Vinke, at the University of Utrecht, Netherlands, was working on a study to find out ways to calm down cats in shelters.

Vinke alongside a Dutch activist divided two groups of cats and gave one group boxes to hide in whenever they felt like it.

According to the study, the stress levels of the group of cats that had boxes were lower than the other group. The group that had boxes, took less time to adapt to their new surroundings and showed better levels of interaction with their carers.

“Hiding is a behavior that cats do when dealing with environmental changes or stressful situations.”

Cats Like Boxes Because They Can Remove Themselves From The World

Another conclusion that many studies have come to is that cats don’t adapt well to conflict.

When faced with a situation they don’t like, cats prefer to run away. Therefore, boxes provide them with a temporary refuge where they can calm down and analyze the situation from a more neutral position.

This sort of reaction, despite being very common, can also be a sign that your cat hasn’t adapted well to his environment or something nearby is stressing him out.

A cat’s body temperature can vary between 38 and 39°C, which is a couple of degrees higher than human’s. Cats like to be cool and isolated, which is why it’s so common to find them in the bathtub, sink, or even in a wardrobe.

Boxes can help a cat regulate his body temperature during the summer. Think of it as a tool for them to better cope with hot days.

In winter, it has a contrary effect: boxes help them maintain their body temperature because the small space provides them shelter and has them curl up in a ball to keep them warm.

The animal world is full of mysteries that even the brightest scientists are yet to fully understand. However, sometimes things are even simpler than they appear, as is the case for why cats like boxes.