How Can You Tell if Your Dog Doesn't See Well?

Your dog will have some obvious symptoms when it comes to losing their sight. However, dogs can certainly have a good quality of life due to their well-developed senses of hearing and smell. 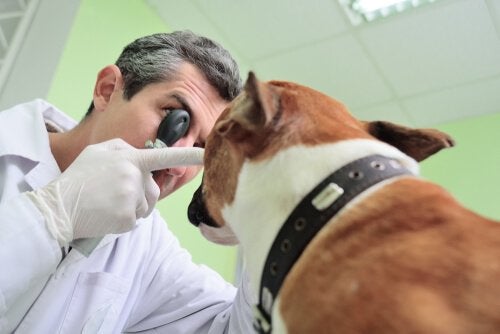 Vision is one of the most important senses because it allows us to see our surroundings, and go anywhere at will. Along with other senses, sight allows dogs to see the world differently. But what would happen if your dog can’t see well at all?

Vision loss is devastating for all animals, but it’s not the end of the world for them. Dogs have different senses that help them understand the world around them. The causes of blindness vary, and finding out if your dog is having troubles seeing is easier than it seems.

Blindness is the partial or total loss of vision in one or both of an animal’s eyes. This condition is common in older dogs, although it can also happen to newborn puppies.

The causes for vision loss in dogs are to due genetic reasons. If any of the parents or grandparents have this condition, it’s very likely that the next generation will also be blind.

In these cases, a dog’s eye is affected in different ways. At birth, the puppy might have deformities in his eye structure. The cornea or lens may not be fully developed. In rare cases, the animal may be missing an entire eye, but this does not happen often.

Ways to tell if your dog is having troubles seeing

If you’re very attentive to details, you’ll notice changes in the way the eye looks and moves. Here is a short list of changes that might appear in the animal’s eye:

Illnesses like the flu can affect a dog’s vision. However, other disease like cataracts can make your dog completely blind. Sometimes, there are cases where the animal’s eye looks fine, but the animal demonstrated an odd behavior. Look at examples below:

These last symptoms are more noticeable when you’re taking the dog out for a walk. Sometimes you might have to call your dog constantly to get their full attention in order for them to find you safely. In more severe cases, you might notice that your dog is anxious before going outside. This happens because the dog has ddevelopeda fear of adventuring into the unkown.

If your companion has these symptoms, chances are your dog doesn’t see well. In that case, the most urgent thing to do is to take him to the vet to run the necessary tests and check his eye health. In the event that he is blind, it’s not the end of the world for your dog.

Different ways to see the world

Since vision is fundamental for dogs (as it is for all animals), sight isn’t the sense that they trust the most to observe their environment. However, their sense of smell plays a key role in recognizing known places.

Unlike humans, a dog’s nose is more powerful and allows them to know who they’re with and where they will be going. A dog’s ear works similarly. It can capture frequencies much lower than the human ear can, which allows dogs to hear sounds that are far away.

As for puppies that are born blind, in many cases, people even recognize their dog having this disease. Why? Because this animal has other sense that is very advanced. The loss of sight heightens the other senses as well, which is why they almost grow up like in any other any other dog.