Home » Animals » How to Know If Your Cat Loves You

How to Know If Your Cat Loves You 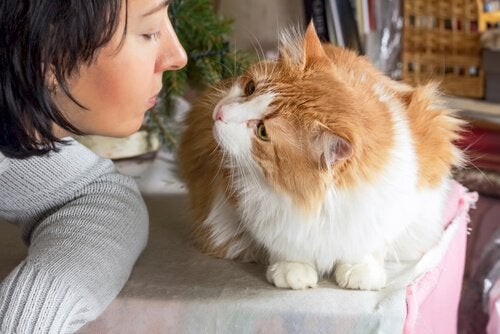 Cats are much more independent and less expressive than dogs, which can make it hard to know how they feel. However, if you learn to read their body language, this can shed a lot of light on their feelings. In this article, you can learn the signs to tell you that your cat loves you.

Do You Want to Know If Your Cat Loves You?

You just have to watch your cat carefully and analyze a few behaviors that show their love for you.

They Love to Be with You on The Sofa

If your cat wastes no time in joining you on the sofa and lying by your side, then there is no mistake that your cat loves you. Cats are definitely much less sociable than dogs, so a gesture like this is undeniably a demonstration of your cat’s love for you.

That said, their independent nature will always shine through, and sometimes you might want them to sit with you on the sofa and they won’t. This is what having a cat as a pet is like…

They Rub Their Head Against You

If your cat sometimes approaches you and hits or rubs their head against you, then this definitely is a demonstration of affection. Many experts have analyzed this behavior and affirm that the objective is to express deep feelings to the other person. These are feelings of attachment, affection, and approval. What more could you ask for?

They Meow When They See You

Obviously, sometimes when this happens they’re just hungry or thirsty. But if they look directly at you and meow, it’s because they want to have more intimate contact with you. It’s as though they want to start a conversation and express what they feel for you. So, isn’t that sweet?

They Don’t Scratch You

If you’ve had your cat since they were very little, you’ve probably suffered many scratches, although obviously not with bad intentions. Scratching is a defense mechanism and when they think that something will hurt them, they instinctively use their claws.

If your cat has stopped doing this over time, it’s because he loves and trusts you. Remember that cats are easily overwhelmed by changes in life and stopping an instinct is difficult for them just like it for humans to give up a bad habit. Isn’t this great proof?

They Disappear When Other Guests Come Over

Perhaps you’d really like your cat to be near you when your friends come over. However, if he disappears when other people come over for a visit, but he’s always with you when you’re alone, then doesn’t this mean that he wants to be with you and no one else?

At least you now know that your cat wouldn’t trade you for anyone else, even if sometimes he doesn’t pay that much attention to you or it seems like they don’t want to spend time with you. To understand a cat’s love, you need to pay closer attention to its movements.

They Lie on Your Feet

This is something that dogs also do a lot, but if your cat does it then it’s because he has much more to tell you. If you’re sitting down on the couch, and your cat twists around your legs and lies at your feet, it’s because he’s seeking your warmth and affection. He wants to be with you and he loves you. Have no doubt about it!

This is a cat behavior that bothers a few people, especially when they’re sleeping, but it’s still a great demonstration of love.

The pads of their feet are a means of communication because they give off pheromones, so if they’re doing this it’s because they’re drawn to that person. If you cat is kneading your clothes or sheets, it’s because your cat loves you and wants to be with you, and he wants your love too!

Now you know the most obvious signs that your cat loves you. Have you seen other funny demonstrations of affection from your cat? Well, don’t ever doubt your cat again, and enjoy receiving his love. Obviously, he only does it when he wants to – you know how cats are like!