Istanbul: The City of Cats

Although cats were already native to the area, the truth is that with the arrival of merchant ships, their numbers multiplied. These animals are not considered aa "pest"', they are highly valued by the locals. 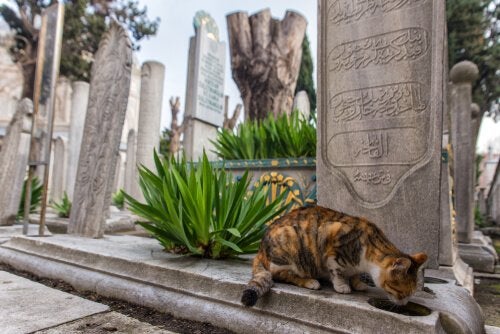 Turkey is has a rich history in Western civilization. The capital, Istanbul, has been often called the crossroads of the world, but few people know that this nation also has another name: the City of Cats.

From Constantinople to Istanbul, centuries of history

Istanbul, originally called Constantinople by its founder, Emperor Constantine I, was founded in the 4th Century. It was the capital of the Western Roman Empire and it was the main port city for many centuries due to the Bosporus which separates Europe and Asia.

Therefore, it was known as “The Crossroads of the World” because it connects several cultures int he region. Nowadays, it’s known as Istanbul due to the arrival of the Ottoman Empire. Sultan Mehmed II changed its name for political reasons.

However, where do the cats come into all the picture? Well, cats were already native to the area, but due to the arrival of merchant ships, many more cats were brought to the city. As time passed, more and more cats came to the city and made it their home.

The affection and love shown by the locals to these animals are so great that they are able to hang around inside the oldest buildings. Therefore, cats form part of the history of the city along with its historic monuments.

“They would not move, though the Sultan himself would even pass by.”

Now the city of cats

Sitting in a park, or sunbathing, you’ll find cats in pretty anywhere in the city. They’re truly the kings of the city and are not afraid to show it.

In modern Istanbul, it’s common to see packs of cats in alleyways and on rooftops. In fact, there’s not a single place where a cat is not on site! The cats of Istanbul are icons of the city, just as much as the Hagia Sophia and the Galata Tower.

Even if the most restricted areas of the city you can find cats. The locals consider them to be good company and good luck, and you can even find them in and around the government buildings.

The presence of so many cats doesn’t bother the local residents one bit. In fact, they’re often very glad to have them because they were, and still are, great hunters of rats. Furthermore, in the Islamic faith, they believe that the Prophet Mohammad was a cat lover.

Istanbul is also known as the city of cats because the residents look after them. There are current laws which protect these animals, to the point that the locals consider the death of a cat to be a sign of bad faith.

Turkish proverb: “If you kill a cat, you need to build a mosque so God will forgive you.”

For any visitor to the city, to see this number of cats in one place can be quite overwhelming, but the truth is that they’re just part of the population, along with a large number of dogs that live there too.

The word ‘kedi‘ in Turkish means ‘cat’ and, if it weren’t clear enough, this documentary is about the life of felines in the city of cats. Ceyda Torun, the director of this film, has taken it upon herself to explore the life of cats in her hometown.

The documentary relates the life of different cats to different personalities, all of them obviously framed by Istanbul and their relationship with the residents. There are currently 150,000 cats that live in the city and each cat is different and unique.

In summary, this city’s history is linked to cats, with their presence being almost as old as its very foundation. If you plan to visit the city one day, remember to pay them the respect that they deserve.