Loyalty After Death: A Dog Refuses to Leave His Owner's Coffin After Italian Earthquake

A dog refuses to abandon his owner after his death and lies down next to his coffin. Read about one of the many and terrible stories caused by the 2016 earthquake in central Italy. 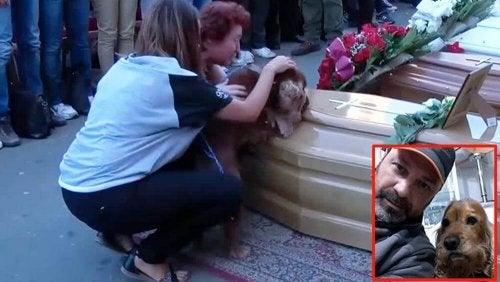 A dog’s loyalty is something that really touches a dog owner’s heart. However, in extreme cases like illness or death, this loyalty can go far beyond our expectations. This story is about a Cocker Spaniel whose owner died in the 2016 earthquake in Italy. In the video, you can see how the dog refuses to leave his owner’s coffin.

A dog and his owner

Andrea Cossu, 45, lived in Pescara del Tronto, a town located in the middle of the Italian peninsula. He was one of the almost 300 people who died after an earthquake devastated the country on August 24, 2016.

Cossu and his dog were “inseparable,” according to his family members. Because of this, they brought his Cocker Spaniel to his funeral.

The animal had an extreme reaction to the loss of his owner. As the family approached the casket, he began to sniff the coffin and wag his tail. He recognized that Cossu was in there. He then lied down next to the coffin and refused to leave.

Images of a gym turned into a large funeral home

A collective funeral of the earthquake victims was held in the Municipal Gymnasium in Monticelli. Authorities came to say their goodbyes and honor the 35 people from the town who lost their lives during the 6.2 magnitude earthquake.

The funeral was also recognized nationwide. Both the Italian President Sergio Mattarella and Prime Minister Matteo Renzi assisted the funeral.

However, what made the news at the funeral was the dog that refused to abandon his owner. Cossu lies in one of the many coffins that lined the gymnasium.

Hachiko, Canelo and other loyal dogs

Among the many stories of extreme loyalty from dogs to their masters, the story of Hachiko might be the most well-known. The tale of this dog transcended cultures and even became a Hollywood film.

In Spain, the most famous story is Canelo. Canelo was owned by a homeless man from Cádiz. Canelo waited for his deceased owner outside the hospital door for 12 years.

There are many stories from several places and times. For example:

Can a dog’s loyalty be explained by science?

So far scientists have been unable to find an accurate explanation. There is no science to show why dogs would wait several years for the return of their owners or spend days next to their graves.

It is understandable that showing something so connected to love would be difficult to show in an experiment.

Everyone in My Animals truly desires our deepest condolence to Cossu’s Cocker Spaniel and the rest of his family.