The issue of stray dogs is, in reality, a pandemic. 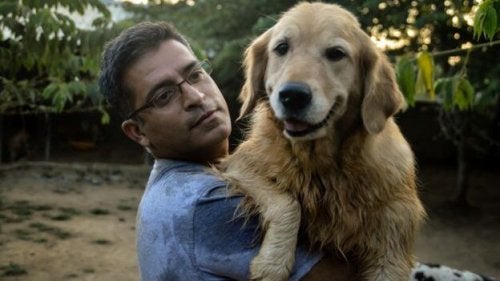 Many countries (especially in the Global South) struggle the problem of strays. Basically, thousands of animals are abandoned every year. Yet, some humans do the extraordinary. One man rescued 735 stray dogs. He provided a much-needed ray of hope. Maybe at some point, other people will find inspiration in him. Then, they, too, will realize that dogs are living beings that need love, food and shelter.

The man who adopted 735 stray dogs

Rakesh Shukla lives on a 1.5-hectare farm near the city of Bangalore, in the Indian state of Karnataka. He would always see stray dogs walking from here to there. But, unlike most of us, he did not sit idly by. Instead, he started adopting each one he came across! The first to arrive was a 45-day-old Golden Retriever puppy he found on the street. That was in the year 2009, and since then he has never ceased in his campaign to give a home to all the unwanted strays that cross his path.

The last count gave a very striking result – he has no less than 735 furry creatures surrounding him. They love him unconditionally, and show him so by wagging their tails, jumping up to say hello or licking his hand. For his part, he takes the time to walk around his farm stroking them, scratching their ears or just giving them a little pat on the head.

The animals are of all types, age and size. But while they are mostly stray dogs, there are also some pedigrees in the mix. Among them are a beagle, a great Dane, a rottweiler, a Golden Retriever, a Labrador, a pug, a sausage dog and a Saint Bernard. The most recent arrivals were 22 pedigree dogs that were left homeless when their owner passed away.

According to Shukla, known as “the father of dogs,” he is the last hope for most of these animals. Many are sick or old, and nobody wants to adopt them – and that’s why he considers himself the father of all these “babies,” as he calls them.

The farm employs 10 people. There, they are responsible for feeding and cleaning up after hundreds of dogs. Rakesh has owned the farm since 2012. But, he receives some much-needed help from vets and trainers. Each day, the animals get through 200 kg of chicken and 200 kg of rice. And in addition to the cost of all those mountains of food, a good amount of money is spent on medications and special treatments for the dogs.

Rakesh himself takes care of most of the expenses (about 800 euros per month), while the rest is covered by donations. And although he has had problems with neighbors and animal advocates, he insists that the only way he will be parted from the dogs is when either he or they die.

Did you think Rakesh’s story was the only one of its kind? After all, the man rescued 735 stray dogs. It’s quite a feat. Or, did you think this story was about ordinary people adopting a huge number of stray dogs? If you did, you’re sorely wrong. What about the story of a group of five elderly women in China who together care for 1300 dogs (approximately)?

The shelter was started in 2009 by one of the women, Ha Wenjin, when she rescued several stray dogs that lived near her house. As time went on and she took in more and more dogs, she ended up having to give up her job to care for them – she even sold her house, car and jewelry to feed and care for the creatures.

Ha Wenjin was later joined by four older women who knew her from the neighborhood in Shaanxi province. Every morning they get up at 4 in the morning to feed the dogs and cats that are under their care. Without the help of these women, the animals would without a doubt die of hunger, cold, illness, or get run over by a car.

Government officials have complained to Ha Wenjin about the land used to build the shelter, and have even threatened to close the place. For that reason, the group of women have been forced to move, along with their more than a thousand dogs, to an area far from humans, close to the town of Houyu. And to do it, they rented four buses to transport all the animals to their new home!