A Martingale collar is a type of collar that can inflect pain and injury. Instead of using them, you can use other alternatives. 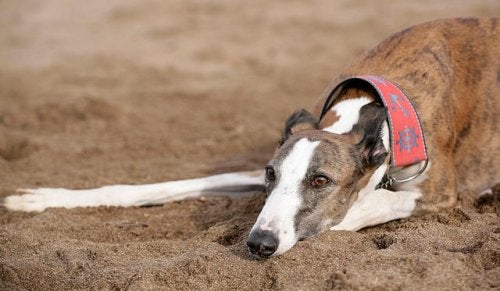 Greyhounds are one of the most abused dog breeds and many animal welfare workers are specializing in greyhounds more than any other breed. These dogs are very noticeable due to the shape of their slender and apparently fragile body.

Many of them have been abused or abandoned, which explains why it’s difficult to find one that isn’t frightened. You might have often seen greyhounds wearing a Martingale collar, that’s normally made out of colored fabric. Today we ask, are Martingale collars for greyhounds the best choice?

What is a Martingale Collar?

A Martingale collar is a wide and pretty-looking collar which is normally made out of leather or fabric and it splits into two parts. One part is fixed with a hoop at either end. A movable part is fed through these hoops. The leash attaches to this movable part. If the dog pulls on the leash, the movable part tightens the collar around the neck. So, if the dog tries to get free they won’t be able to.

Martingale collars for greyhounds are actually very easy to find and there are many manufacturers who make them out of colorful fabric. Unfortunately, animal welfare workers specializing in greyhounds sell them in order to have source of income.

Why Do Owners Use Martingale Collars?

Owners use Martingale collars on their greyhounds fort two main reasons: 1) The size of a greyhound’s neck compared to the size of their head 2) the fear that many greyhounds have with wearing collars.

Usually when a normal dog feels scared and has a normal collar on, he will try to run away and won’t be able to because his neck is narrower than their head, so the collar can’t slip off over the ears.

However, as far as greyhounds are concerned, their neck is very wide compared to their heads, so they can get out of a normal collar very easily. Therefore, the Martingale collar will tighten if they try to escape and they won’t be able to get out of the collar.

Why is the Martingale bad?

Many greyhound owners don’t realize that a Martingale collar does cause damage. In other articles, we’ve already mentioned the health problems caused by pulling on the leash and the pressure exerted on the neck over a long period of time.

This type of collar causes the same health problems that occur in dogs that wear choke chains or training collars. These collars constantly squeeze the neck, just like a Martingale collar. The Martingale collar uses a strip of fabric instead of metal spikes, but the pressure is still the same.

Even though Martingale collars for greyhounds have a maximum pressure they can exert, it’s still excessive. The neck is a sensitive area for any dog.

Likewise, some greyhound owners don’t think about muscle memory, which are the sensations or memories associated with touch. If the greyhound was previously abused with a choke chain or something similar, then they’ll get scared or defensive every time they something tighten around their throat.

Obviously, the Martingale collar is going to trigger a lot of bad memories, and their recovery from their abuse will take a lot longer, if not be impossible.

Alternatives for the Martingale Collar for Greyhounds

Normal collars offer no assurances with a greyhound because they can easily escape from them. However, normal harnesses don’t seem particularly secure either because of the greyhound’s slim chest.

Three-point harnesses or anti-escape harnesses are becoming more popular. They’re normal harnesses which fasten around the dog’s chest and ribs, but they also have a fastening point around the belly – the narrowest part of the dog’s body.

With this third part of the harness, being the shorter of the three, the dog can’t escape. Even if they manage to get out of the other two straps, they won’t get out of the third one.

Like other harnesses, if the dog tugs on it, the force will spread over the chest and ribs. In other words, the pressure is on the bones and not on soft sensible parts of the body such as the neck. The dog is also more securely fastened than just wearing a collar.

Finally, if a greyhound has experienced cruelty, he will spend the rest of his life sad and frightened. It’s now time to recognize that Martingale collars tighten around the neck and are painful. The best choice for any hound will be a three-point harness. They’re very secure and better for a dog’s health.