Meet the Kiwi, A Flightless Bird

For millions of year, there were predators in the air and no terristial mammals. Therefore, this species adapted to living on the ground. 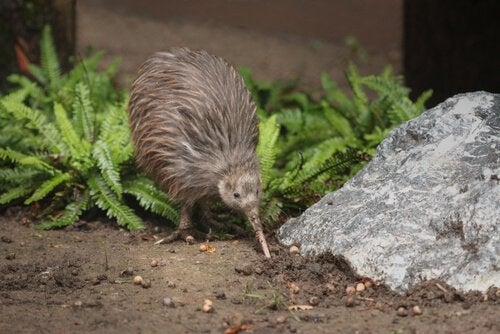 Many people have described the fauna of Oceania as strange. One of these strange animals is the kiwi which is a flightless bird with feathers that look like a coat of fur.  Also, this creature has whiskers and no tail along with a unique beak that’s long and slender because it has its nostrils at the tip.

Although its name reminds us of a fruit, this flights bird was declared as the national bird of New Zealand.

It’s an endemic species to this country, and has lived there for thousands of years. However, some studies show that despite its small size, it’s related to the extinct, gigantic elephant bird of Madagascar.

Perhaps the non-existence of mammals– with the exception of bats– until man’s arrival, and the isolation of this part of the planet, caused this animal to have such strange traits. Therefore, during millions of years the kiwi adapted to living on the ground without having any terrestrial predators.

Meet the kiwi, a flightless bird that doesn’t fly that;s considered to be the national bird of New Zealand.

The Kiwi isn’t a Mammal, but…

A member of the Apterygidae (meaning “without wings”) family, the kiwi belongs to a genus of paleognathous birds that contains five species differing in size and plumage color. Their height is between 25 and 45 cm and they weigh ranges between 1.3 and 3.3 kilograms. Also, females are bigger than males.

In addition, like all birds in the ratites group — the birds that don’t fly– they have a flat sternum. Therefore, these birds don’t have the muscular structure to make flight possible. Although people think the kiwi doesn’t have any wings, it does have them. However, they are very small. They measure about three cm long and are close to their bodies, which makes it difficult to see them at first glance.

On the other hand, their legs are very strong and muscular, and they make up a third of their body weight. The kiwi has bone marrow because it doesn’t need a light skeleton that’s meant for flying. It has four padded talons that help them run very fast.

Plus, they use their legs can be used as powerful weapons to fight or defend themselves. Although some people consider them as timid and fragile, these birds are very territorial and aggressive.

More details about the kiwi, the flightless bird

Another strange fact about the kiwi is its body temperature, which is lower than most of its winged relatives. Actually, it’s closer to a mammal’s. It can vary between 98.6 and 46.4 degrees Fahrenheit.

Perhaps due to being a nocturnal animal, the kiwi relies mostly on its sense of smell and sensitive, cat-like whiskers, located on their face and around the base of their beak. Strangely enough, most birds rely on their sight but kiwis use their whiskers probably to make it easy for them to get around in the dark.

Also, it has a fairly developed sense of hearing, and very visible hearing openings. On the other hand, the “hairy” look of its feathers is because they lack filaments.

Likewise, the different patterns on their plumage allow these birds to camouflage well into their habitat, which is good for keeping the safe from aerial predators.

This animal is also strange when it comes to reproducing and raising chicks. Most birds have one ovary, but the kiwi has two. The female usually lays a single, huge egg. At most, she lays two, and their size equals 20% of her body.

The male will usually incubate the egg for about 10 weeks until a feathered chick hatch. As of hatching from the egg, kiwi chicks already know how to fend for themselves. They don’t stay in the nest for more than a week, and their parents feed them occasionally because their eggs provide them with nutrients to feed on.

The kiwi is a monogamous bird, which means that kiwi couples stay with each other for life. They build their nests in dens that were dug up by using their powerful claws.

The kiwi can live in several types of habitat. Then can live in snow-capped mountains, coastal dunes, moss-covered forests, and even in grasslands. You can go to all of these places and here these birds singing away during the night.

It’s not usually to spot a kiwi during the day, not due to hiding from all of the predators in the air, but because there the underground invertebrates they eat are closer to the surface at night.

In any case, it’s an omnivorous bird that eats worms, berries, seeds, leaves, and some insects.

The Kiwi is in Danger of Extinction

The kiwi has a life expectancy of between 10 to 15 years. However, today it is in danger of extinction. Fortunately, more and more areas are reversed to protect them.

However, since man populated the islands and introduced different kinds of mammals, their predators have increased. Today, besides eagles and hawks, there are cats, ferrets, and even dogs. The destruction of their natural habitat also affects their survival.

In areas where predators are controlled, half of the chicks survive. Outside these areas, 95% of these birds die before reaching breeding age.

Link copied!
Interesting Articles
Invertebrates
The Life of the Snail - Carrying Its House on Its Back