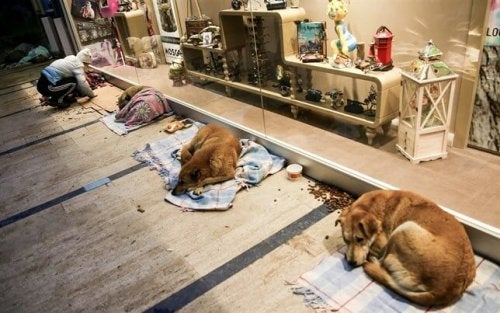 We’ve talked before about Istanbul and its famous love for animals, and especially for cats. But in this case, it’s dogs that are the protagonists of this story, which again focuses on the incredible love shows for animals by many Turks. The only thing we can say about this is that we wish animals were treated with such kindness the world over. Can you imagine a shopping mall opening its doors to let stray dogs sleep there anywhere else in the world?

Istanbul and its love for animals

As we’ve already talked about in detail in previous articles, the residents of this Turkish city are famous the world over for their love of cats. In fact, the city even has a statue of a cat that has become characteristic of the place.

But just a few days ago, these wonderful people went a little further. As you know, any thought of Europe in winter brings to mind snow, low temperatures and warm clothes. There’s no doubt that winter is a tough season for the human residents of many parts of the continent. But sometimes, we forget that other creatures also suffer the same harsh conditions.

We’re talking, of course, about stray and abandoned animals who live on the streets of the continent’s big cities. It is estimated that there may be millions of dogs on European streets. And in Istanbul, in particular, they are found in huge numbers, since the residents of the city typically take care of and feed the strays.

The city’s inhabitants show these animals great love and care over the years – and it’s exactly that that’s making the news once again today.

The viral video of dogs sleeping in a mall

Lisette López Melgar is the woman responsible for letting us know about this heartwarming piece of news. Whilst on holiday in Turkey, she witnessed an incredible sight: hundreds of dogs were sleeping in shopping centers during the night.

So why was this happening? There was one clear cause: the terrible weather. As we said earlier, the low temperatures that characterize the winter in European countries also affect those who live on the street, whether they are humans or animals. That’s why the country’s shopping centers opened their doors to protect the animals from the cold, in the hope of helping them not just to pass a pleasant night, but also potentially to save their lives.

The snowfall that had hit the city the night before had been impressively heavy, and everyone rushed to protect themselves as quickly as they could. But what could the poor little animals that lived on the street do to protect themselves? Nothing! Not of the humans around didn’t lend a hand, that is. And that’s just what they did!

Soon, workers from the shopping centers were tempting puppies and dogs living in the areas around each center with food and toys. They also prepared temporary beds using piece of cardboard, so that the cold from the floor wasn’t able to penetrate into their bones.

They also collected blankets to cover them up with, so the little animals could sleep in warmth and peace. For many people, unknown dogs can be a cause of fear and alarm, especially those that are strays. Dogs that live in the street can tend to be fearful and distrustful for exactly that reason – sometimes, they can even display aggressive behavior.

The grateful dogs of the shopping center

But it seems that the stray dogs in this case couldn’t have been happier about what the humans did for them – and that’s reflected in the tranquility and peace you can see in the photos of the event. Each little dog snuggled up in its own bed, appreciating not just the warmth but also the love of a human.

So what can we say about these wonderful people? We believe that this kind act says everything you could wish to know about their humanity. We only wish that people the world over treated animals in this way. They say that love for humans begins with love for animals – and without a doubt, showing love to animals makes us more sensitive and empathetic. So it stands to reason that, if we all started doing small things like this, we could truly create a better world.

For now, it only remains to say bravo, Istanbul!