A dog's behavior often depends on childhood fears or traumas, genetics and the training from his owner. However, there's a solution for everything with just a little patience and determination. 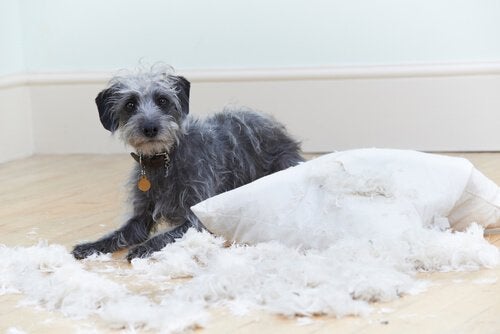 Your pet’s behavior is based on his training and certain traits on his breed. However, dogs often have behavioral problems due to a lack of socialization or genetics. Read this article to learn about some aspect that plan an important role in dog’s behavior.

Behavioral problems in dogs: why they occur

It’s important to know the aspects that cause an animal to misbehave. Also, you need to understand that there aren’t any “right or wrong” actions for dogs: it all depends on what the owner says, and what he has taught him.

Genetics are a determining factor for behavioral problems in dogs, and they can sometimes cause learned behaviors. For example, if a female dog is frightened, most likely her puppies–at least some of them– will share that characteristic.

At the same time, the socialization process of an animal is also determines how it behaves. This process should begin when the puppy is one month old, and end eight weeks later. During this period, he will learn many of the habits that he’ll take with him into adulthood.

Therefore, dogs that have been separated from their mother or siblings from an early age may have behavioral problems such as biting, anxiety, nervousness, not be accepting of other pets, etc.

Never ignore the trauma an animal has experienced at some point in his life, because it defines his character and personality.

The most common behavioral problems in dogs

Note that your pet can develop one or more behavioral problems depending on how it has been brought up. You shouldn’t feel guilty, or feel that you have failed as an owner. Keep in mind that a dog “inherits” some bad habits form his past. Fortunately, certain animal behaviors can be reversed or improved with practice and patience.

This can be good or bad, depending on the circumstances and the place. For example, if your dogs digs holes all over the garden and destroys plants, you should scold him and teach him that this is wrong.

For this to work, you have to scold him while he is digging, not when he has already made the hole.

This is one of the most common behavioral problems when dogs have suffered from minor trauma, or some “inherited” trauma from a family member with anxiety issues. Plus, we can’t ignore fear that comes from ignorance or a lack of experience.

If your pet is afraid of people, other animals, or water, you’ll have to help him come into contact with these things on a daily basis by inviting your friends over, taking him to the park, bathing him, etc. That way he won’t see those things as dangerous, but as a part of his life.

When a dog stays home alone for many hours, he might behave differently by crying, breaking things, going to the bathroom everywhere, barking, scratching the door, etc. You should be patient with this behavioral problem.

Some owners choose to bring a new pet into the home when they have time off work, that way the dog will gradually get used to being alone.

Puppies explore the world through their mouths, which is why they break and bite everything within their reach. The problem is when the behavior persists and your house gets messed a few months afterwards.

Break this habit as soon as possible by giving your dog chew toys.

5. Begging for food all the time

Dogs have the “ability” to make faces according to the situation to get what they want. Therefore, when they see their owners eating, they immediately put on their sad face until they get what they want. Of course, you can prevent or eliminate this behavior in a variety of ways:

Ignore their “pleas”. Put them in a different room, away from the kitchen or dining room, or give them their food while everyone else eats.

Some dogs become very aggressive when they see other animals or people, and they become dangerous to everyone. They act this way out of fear, territoriality, trauma, or to protect personal belongings. Analyze their motive and help them get over it.