A legal change offers hope to animals in cages. Read on to learn the latest on the dog mean stalls in Morán. 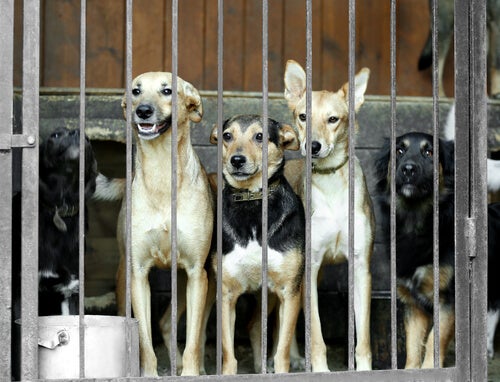 If there is one thing that people find difficult to accept, it is customs from other cultures that sharply contrast our own. That is why it is good news that South Korea has decided to end the dog meat stalls in the market of Morán.

The shops selling dog meat must be converted

Located in the city of Seongnam, about 26 kilometers south of the Korean capital, this fair has been in operation since the early 1960s. It has the reputation that one can find anything they seek there. Even, unfortunately, dog meat.

It is estimated that some 80,000 dogs per year were sold, dead or alive, in the market. It’s not for nothing that Morán was considered the premier supplier of this “product” in that country.

But now, the 22 merchants dedicated to this “item” must dismantle their cages and slaughterhouses before May 2017. To compensate, the mayor will provide them with a subsidy. The idea is for them to convert to other activities.

In the market of Morán in South Korea, the stalls dedicated to the commercialization of dog meat will have to change their activities before May 2017.

A long struggle in the defense of animal rights

The organizations that fight for the rights of animals denounced this issue for quite some time. One of them is the KAAW (Korean Association for Animal Welfare).

The dogs were crowded. In addition, they were on exhibit. So, customers could literally choose which one they wanted to eat. Then, a buyer could take the selected specimen alive. Or, they would slaughter the animal. This even happened in plain sight. And the use of cruel methods to kill them (electrocution, hanging, beating, etc.) is well documented.

Despite the approval of animal rights activists for this measure in favor of dogs, they know that their task does not end here. Now they must watch more than ever. This is so that the practice does not continue clandestinely. Of course, ti could happen both in the market and in its surroundings. In addition, they have to continue fighting so that the ban on the marketing of dog meat spreads throughout the country.

The decision to close these stalls in the market of Morán also emerged after tourists’ complaints. In addition, neighbors demonstrated against it. They felt affected by the noise and smells that this type of “business” generated.

However, some suspect that the measure is more opportunistic. It would have to do with the fact that South Korea is the organizer of the 2018 Winter Olympics.

The sentence pronounced by the mayor of Seongnam can be measured by that rod. Lee Jae-myung did not have any qualms with quoting Gandhi. “The city will take the initiative to transform the image of South Korea, since the greatness of a nation can be judged by the way its animals are treated,” he said.

As in other Asian countries, dog meat is considered a culinary tradition in Korea. But its consumption has dropped drastically in recent years. Its occurrence lowered as dogs became pets. Proof of this is that, in the same Morán market in 2001, there were 54 stores dedicated to this “business.” Now there are only 22 places left that have already begun to be dismantled.

However, there is a legal limbo that allows these practices to continue to be carried out. South Korea does not have legislation that prohibits the sale and consumption of dog meat. But neither is the activity regulated.

And although the regulations related to the slaughter and distribution of livestock do not include dogs, nevertheless there are commercial farms where these animals are bred to meet the demand for meat.

So, while this great step must be celebrated, it is clear that there is still much to be done for the welfare of dogs in this country and also in the rest of the world.