Take Your Dog To Work Day! 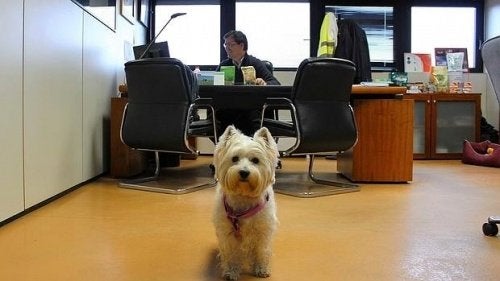 Here on the My Animals blog, we’ve talked a few times already about PetFriendly. This is a technique that companies are trying to help their workers reduce stress, and be more efficient. But what exactly is this strange new practice of having a dog in the office?

You may well be a little confused about how having a dog in the office will work in practice. But the truth is, the results are often gob-smacking.

The United States was the country that pioneered this – basically, the idea is that everyone who has a furry friend at home can bring it into the office with them. This means that the dogs are not left alone at home all day while their owners work, and the workers won’t be distracted and worried thinking about how their dogs are doing.

The results were not just positive for those who took the opportunity to bring their dogs into the office. Even those who didn’t have dogs ended up enjoying the company of their colleagues’ dogs, and stress levels reduced!

Affinity is the name of the company that piloted this curious project, and helped to prove that any situation is made better by the inclusion of a dog or cat.

After some more intensive testing of this system, the positive results are clear beyond doubt. Thanks to this, nowadays something called Take Your Dog To Work Day happens each year. It’s a tribute to those pets that provide a bit of humor and affection in the workplace each and every day.

The celebration was launched in the United Kingdom, and then spread to the United States. It takes place on June 24 or, failing that, the Friday closest to that date. On that day, everybody has the right to bring their pet into the office – although at Affinity, lucky workers can do just that every day of the year.

A university in Virginia in the United States has produced clear results proving that having animals in the workplace fosters good collaboration, and greatly reduces the stress levels of team members.

That’s why big companies in the US such as Amazon, Google or Ben & Jerry’s allow their employees to bring their dogs into the office throughout the year. However, this is not yet a practice that is common in smaller businesses and workplaces.

In the companies which allow pets there are Doggy Zones, where the various furry friends can hang out in case they do get a little unruly. It’s also a space where they can enjoy the company of other dogs while the workers go about their business.

The benefits of the scheme don’t just extend to its human participants. The animals that accompany their owners to the office also learn to socialize better, and their quality of life improves. They don’t have to stress out wondering when their master will return home, or face a day of boredom and solitude.

On this day, especially in the US, dogs can go along with their owners to all workplaces, not just to the large companies where the practice is more accepted. It’s the one day of the year when bosses can’t say no…

Celebrating this day aims, in addition to honoring dogs, to spread the word about the enormous benefits that pets bring to people, and therefore also to companies.

The hope is that one day, bosses of large and small companies will accept the benefits of allowing their workers to bring their furry friends into the office with them. Will this work? Let’s hope so!