Talking to Your Dog Makes You Smarter

Maybe you have been called crazy for talking to your pet. But that's simply not true! 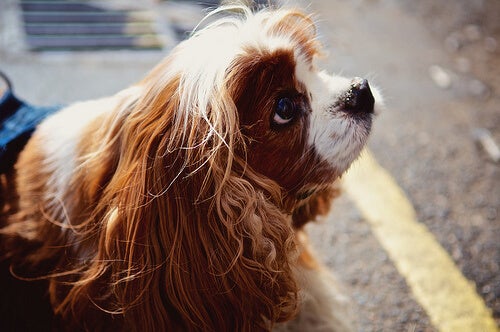 Maybe your loved ones don’t understand why you treat them as if they were a person or your child. In this article we are going to tell you why your attitude towards your pet makes you smarter. It’s surprising!

“Did you miss me when I was gone?” “Did you like lunch?” “How about we go for a walk?” “Today is the perfect day to lie down on the couch and do nothing, yeah?” If these phrases sound familiar to you because you often say them to your dog, don’t worry. You are not the only person in the world with this habit.

While people may think that we are a little “nuts” for having conversations (actually monologues) with our pets, the truth is that it’s one of the healthiest ways to establish a relationship with them.

Dogs know us better than anyone. What’s more, we know what is wrong with them just by looking at them. That’s why company and affection are mutual. Canines have the ability to “sniff” when we are sad, depressed, or elated. They are an excellent therapy and make our lives happy. There is no doubt about that.

In recent years, many people, couples, or families consider their dogs as another member of the family. This process is known as “anthropomorphism.” And while it’s not something new, it’s becoming more and more frequent. Historically, this human behavior towards animals had been considered as stupidity, craziness, or childishness.

However, it’s a natural “byproduct” that makes us the most intelligent beings on the planet. Or at least that is what the study of Nicholas Epley, professor of Behavioral Sciences at the University of Chicago, indicates. According to him, no other species has the same habit as us.

This behavior is not only related to animals, but also to objects, events, and concepts. For example, we say “damn” to the heat when it’s about a natural phenomenon, or we talk about an element in the same way as we do about a person.

This fact (transferring a human conscience to an object) requires a lot of mental processes. That is why those that achieve it have a greater cerebral capacity. This means that instead of treating them as “dumb,” we should recognize that they have a superior mental power.

The research seeks to show that when a person attributes a personality to a dog or an object, it is actually making his or her imagination work. Also, in turn, it strengthens the ability to perceive the mind of other living beings. There are even those who claim that it is an ability to maintain mental health (by keeping the brain active).

We as people are sociable beings par excellence and we need to interact. When we don’t do it with other “peers,” we search for contact with animals. And since dogs are the main pets, they become the “target” for our conversations.

When we are faced with the possibility of contacting with another being, we do our best to encourage communication. We look at our pet in the eyes, we give human qualities to plants, or we describe natural phenomena with purely human adjectives.

We speak to our dogs and they understand

Many wonder if our pets actually know what we are saying to them. And the answer is partially “yes.” According to a canine researcher at the University of British Columbia (Vancouver, Canada), dogs have the ability to understand around 160 words. In addition, they can solve mental problems on the same levels as a 2-year-old child.

What’s more, a study by the University of Sussex (United Kingdom) claimed that dogs also recognize the accent of the person who is speaking to them. Therefore they understand if they are being spoken to with affection or with anger, based on tone, gestures, or hand movements.

Dogs’ brains have similar regions to those of people, and therefore are sensitive to voices and sounds. They can interpret information similarly to us using the same mechanisms. So now you know, talking to your dog is an excellent idea.

Source of the main image: tico_24