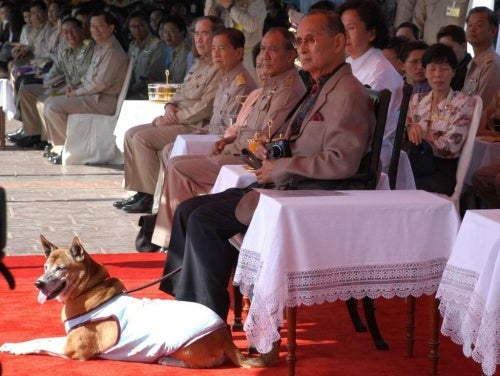 King Bhumibol Adulyadej of Thailand has become very well-known throughout the world in the last few years. This is because of the enormous fortune that he has and because he is one of the heads of state that has been in power the longest. Recently, however, everyone has been talking about the king again. Not because of anything he did that would make him famous for better or for worse, but because of situation related with “man’s best friend.” That’s right: he adopts dogs.

The king and his princess

To the surprise of locals and strangers, the Thai head of state adopted a beautiful mixed-breed stray dog in 1998 when she was just a small puppy. He adopted her after walking through the streets of Bangkok and finding her wandering.

Since then, the so-called Thong Daeng was an authentic princess. She not only accompanied her owner at almost all of his public appearances, but this beautiful copper-colored canine has also been considered by many as an authentic icon of the Thai Royal House.

The king’s undeniable love for his small four-legged friend reached its peak after the publication of a book dedicated to her. The book, entitled “The Story of Thong Daeng,” was so successful that it sold more than 100 thousand copies in its first hours. Now, it is a cult classic in Thailand.

However, there has also been a lot of controversy concerning this dog. At the end of last year, a 27-year-old man was arrested for writing sarcastic comments on his Facebook page about Thong Daeng. This generated a strong reaction from the Royal House.

Unfortunately, the canine passed away at the end of last year after a terrible disease that she was suffering from for awhile. She left an intense emptiness in both the king and the Thai population.

Besides Thong Daeng, the head of state has also adopted other stray dogs. He even has gone beyond this action by adopting a measure for the protection of dogs. He has encouraged the adoption of those dogs that find themselves living in the country’s streets.

This is something that has earned him respect from many people in the world. The monarch has promoted this noble action at the expense of the purchase of purebred dogs, considering this as unnecessary. In Thailand, there is a canine population of almost 9 million, many of whom are homeless.

As the king comments in his book, stray dogs are much more loving and friendly than the rest. They demonstrate absolute fidelity and humility to their owners, since that is their way of thanking them for having made a space for them in their home and family.

As we have already talked about in a previous article, this Asian country is one in which man’s best friends have the worst lives. Besides the number of dogs that wander around the streets, they are the goods of a terrifying and inhumane business.

We are talking about the trafficking of dogs for the consumption of their meat and skin. They are in high demand in Thailand and other countries like Vietnam or China.

Numerous animal rights activists have revealed that in just the country where Thong Daeng lived, much more than a million dogs are eaten every year. This suggests that even if it is an illegal business, it is expanding.

This is exactly one of the things that people have criticized King Bhumibol Adulyadej about. Despite all the initiatives that he has taken regarding dog adoption and the way that he has protected his deceased dog, he has not taken forceful measures to solve this terrible situation of animal abuse.