The 8 Most Desired Turkey Breeds

The turkey was brought to Europe after the discovery of the Americas, where it originates. Domesticated over 2,000 years ago by natives of what is now Mexico, there are a lot more species than just the peacock (a type of turkey) and the domestic turkey. 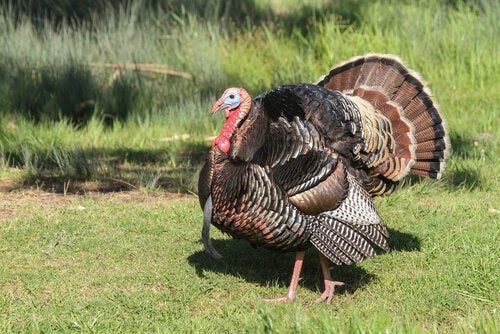 Turkeys are a bird that’s known worldwide. Some people find their meat to be simple but it’s one of the highly sold products during the holiday season. Due to this fact, many people are breeding this animal all over the world, but do you know how many different kinds exist? Continue reading to find out more about them!

The different kinds of turkey

There are two you probably already know about, the domestic turkey and the peacock. However, these aren’t the only two, there are many more. That’s what we’re going to talk about today.

This kind (the image at the top) looks a lot like a wild turkey, except it’s much bigger. These turkeys can weigh up to 33 pounds, which is so big they probably wouldn’t fit into any oven.

They have white wings, black tail feathers, and some reddish tones on their head and wattle (the part under their chin). It’s a rainbow of colors!

As you might guess, these turkeys are mostly white, except for a few spots here and there. Their heads also seem joined to their wattles because these parts have an intense red color.

This one is like the opposite of the White Holland because it’s almost completely black. It has a bright, metallic coat, and a kind of greenish shine. This breed is probably the most similar to the domestic turkey, which is the most well-known.

This breed also has a wild mix of colors. Its body is chocolate brown with shiny, white feathers that draw your attention to its wings and tail.

They have a small head and a large beak. Their neck and wattle are also have a deep red color. These body parts are out of proportion with the rest of their body which is big and puffy.

These turkeys can grow to weigh 17 pounds. They’re generally very healthy and have a strong immune system. This is what makes them one of the most common turkeys for consumption.

They’re also great at reproducing–they can lay up to 158 eggs in a season, and 70% of those will be born. That’s absolutely incredible!

This turkey breed can weigh up to 44 pounds. They have a unique double-breast, and as you can imagine, these birds are huge. Their big, fan-like tails have the same brown color as most of their feathers.

The edges of their feathers have a grayish tone, and the upper part of their neck is purple, which really stands out against the rest of their red body.

These can also weigh between 33-44 pounds, and their feathers can have any tone between golden and pure white. The white ones were more accepted and the browner ones were left to the side, which eventually caused this breed to become completely white.

This happened because the white feathers mean they’ll have fewer skin blemishes, which people prefer when eating them.

These usually have grey feathers, with a mixture of black and white touches. They have a red wattle and a bluish head.

There’s a vertical line clearly separating the white and grey, as if it had been drawn by someone.

The strange about all of these turkey breeds is that people usually eat the ones that come from breeds, which are all man-made hybrids. Most of those hybrids come from the White Holland turkey.