Home » Animals » The Benefits of Children and Pets Living Together

The Benefits of Children and Pets Living Together 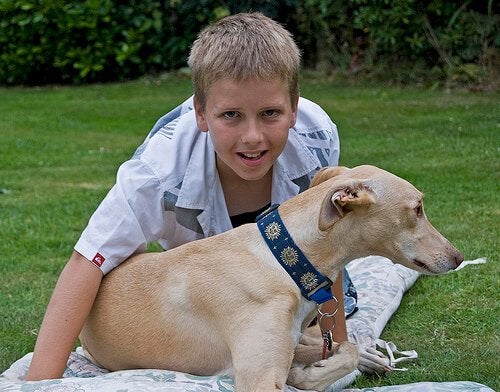 It’s undeniable that when that children who live with a cat or a dog, feel better and end up becoming better people. Having children and pets living together is great for both of them. They both develop better, even if the pet is already quite old.

When Can You Bring a Pet into the Home?

Before we start, let’s think about the perfect moment to bring a pet into your house when you’ve got children, especially if you haven’t adopted a pet before. Up to the age of three years old, children have a hard time telling the difference between a living creature and toy, even if one of them does move on its own.

This doesn’t mean that you can’t have pets around toddlers. It just means you’ll have to pay close attention to them and how they interact with each other. Children who have reached four years old will establish a true relationship with your pet, which consist of them becoming inseparable and best of friends.

This is why you are better off getting pets after having children. Therefore, by the time your child reaches an age when they’re becoming aware of living creatures, they’ll have already grown out of their stage of exploring and causing mischief.

But what should you do if you already have a pet before your baby is born? Well, that entirely depends on your pet’s personality, age, and how he acts with his owners.

Many dogs or cats can feel quite jealous when a baby arrives. They feel as though they’re being replaced. Try to get them involved in family games and activities to stop them from feeling this way.

Benefits of Children and Pets Living Together

Now it’s time to look at the advantages of having children and pets living together. These all apply from the moment the two meet each other.

Having a cat or a dog around during the early stages of life does help children be calmer and develop their self-confidence. They also tend to have less stress, do more physical exercise, and are generally happier.

Although many parents worry about their children’s health, if they have a pet at the home, children and pets living together is great for the development and strengthening of children’s immune system.

That’s right, if they’re exposed to an animal as of an early age, they’ll also be exposed to certain viruses and bacteria. Therefore, their bodies will know how to produce the right antibodies to deal with them. Having dog or cat hair on the floor is also a good thing because it reduces the chance of your children developing an allergy by up to 50%.

Sure, let’s not get carried away. There are also animal illnesses that babies can’t deal with, like parasites or fungal infections. However, you can make sure this isn’t an issue by keeping your pet vaccinated and de-wormed.

This is specially good when your child doesn’t have any brothers or sisters. This way your pet will become your child’s first friend. They’ll get into all sorts of trouble, share each other’s games and toys, and care for each other. There’s no better babysitter than a dog by your child’s side. He’ll never let your child fall over, he’ll make them laugh, and they’ll have a wonderful time together.

This begins when children are a little older, from the age of about six years old, when they begin to see their pet as a living being with feelings. This is the perfect time for them to developing a sense of responsibility for looking after their pet. For example:

Cats and dogs can be very therapeutic for children, especially if they have a problem. It’s widely known that children with pets are more friendly, get along better with people their own age, are less aggressive, and have better communication skills.