Home » Animals » The Importance of Birth Control for Cats

The Importance of Birth Control for Cats

Thanks to neutering procedures, not only can overpopulation and abandonments be prevented, but diseases are also prevented in cats. 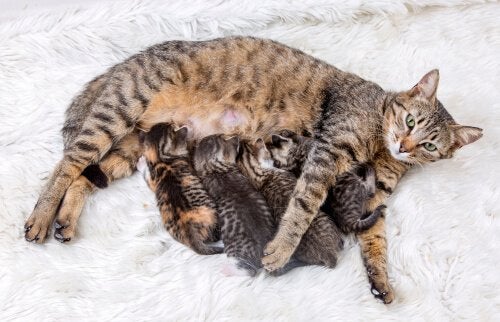 Have you ever stopped to think about whether or not you want your cat to reproduce? This is an important question to ask while your cat develops sexually, because birth control for cats is necessary, in order to prevent unforeseen problems.

Pets are living beings. They deserve respect and a home that gives them all the love and understanding that they deserve. Therefore, it’s the owner’s responsibility to be informed about how to take care of their cat properly. Especially because their lives depend directly on us.

Some people are unaware of the signs that a cat is developing sexually such as the ones below:

Several litters have been abandoned in landfills, alleys, avenues, and roads,  due to a lack of knowledge about birth control for cats. Sadly, most kittens don’t survive due to being so fragile to the weather and starvation.

Many owners don’t love their cats. They get tired of taking care of them and end up abandoning them. Countless numbers of cats die on the streets, of starvation, sickness, or from being hit by cars, all alone.

Others end up in animal shelters, where veterinarians feed and take care of them. They do their best to provide them with love. They try to simulate the warmth of a home as much as they can. However, it’s sometimes impossible to give them the personal attention they need. Some end up dying of grief.

The overpopulations of cats is an evil that contaminates the streets of most societies around the world. It is estimated that at least 70% of people don’t know how to provide birth control for cats.

It’s your responsibility, as a pet owner, to help decrease the rate of overpopulation. Keep in mind that even if you find a home for a friend’s litter, you may be taking away the possibility of adoption for other cats who have been waiting a long time for a family to love them.

Spaying your cat is the best method of birth control for cats. Therefore, you need to know more about this process. It’s beneficial not only for the animals but for societies that resort to serious measure for controlling the overpopulation of cats.

Neutering as a means of birth control for cats

The word sterilization means “making infertile what was once fertile”. That’s why it’s the first action you should consider when it comes to preventing overpopulation of cats in cities.

There are several specific sterilization methods for both females and males. Some of them are: eliminating spermatic ducts or fallopian tubes, orchiectomy (removal of testicles) and ovariohysterectomy (removal of the ovaries and uterus).

The benefits of this practice as a means of birth control for cats, apply not only to communities affected by overpopulation but also to the emotional and physical wellbeing of your pet. It prevents several diseases and improves their behavior.

In females, spaying them eliminates strange behaviors that are caused by being in heat. Likewise, it prevents uterus infections and malignant tumors (the percentage of malignancy is about 85%). It also prevents neoplasms and ovarian cysts due to prolonged heat cycles, and the spread of sexually transmitted diseases such as feline HIV.

In males, neutering prevents aggressive behaviors that are aroused by females that are in heat. Also, it eliminates the risk of tumor problems. Finally, it prevents the transmission of diseases like leukemia and immunodeficiency.

The only con that sterilization can have is obesity. However, that’s nothing that a balanced diet and physical activity through playing can’t solve.

Myths about birth control for cats

One of the main reason why people don’t use birth control on their cats is due to the urban legends that surround it. Therefore, it’s necessary to discuss some of them with your a specialist, to answer any of your concerns, if you have any.

First of all, false pregnancies are hormonal problems, and animals don’t have a physiological need to breed. Also, if a female is spayed at the age of six months old, or before she goes into heat for the first time, it will not stunt her growth. On the other hand, they do not undergo personality changes. Nor do they start acting more like dogs after getting spayed.

It’s important to understand that your feline companion won’t be harmed psychologically if they can’t reproduce. Since they are animals, they don’t have the same moral conflicts that a human might have. Therefore, you should support spaying and do your part by having your cat undergo some form of birth control.