Home » Animals » The Komodo Dragon: Learn About This “Monster”

The Komodo Dragon: Learn About This “Monster”

This massive predator is a reptile that can swallow any prey whole that's smaller than a goat. It mostly feeds on dead meat that it can smell up to 6 miles away by using its tongue. 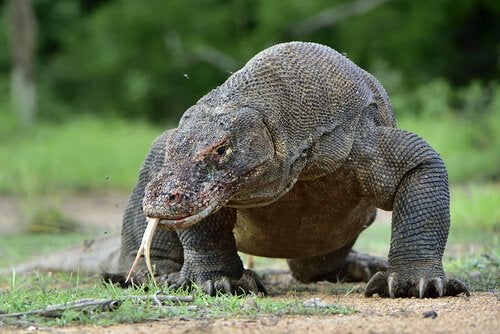 This is the biggest lizard in the world. It can measure nearly 10 feet long, and it’s a massive predator that feeds on dead meat. The Komodo dragon has a fearsome reputation, and a lot of people call it a “monster.” In today’s article you can learn everything there is to know about it.

This reptile is green and yellow when it’s young, and brown once it’s an adult. Its body is huge body and covered with thick scales. There’s really no external difference between male and female, except that males are bigger.

The biggest Komodo dragon specimens reach up to 10 feet in length (their tail is as long as their body), and they weigh over 150 pounds. They’re massive predators in their natural habitat.

They have a long, yellow forked tongue, sixty razor sharp one inch long teeth, and their saliva is bloody because these animals usually injure their gums while chewing. Well, they certainly sound monstrous.

The Komodo dragon’s most developed sense is in its tongue. It can taste and also pick up on smells and find dead meat (its main food) up to 6 miles away.

They come from Island of Komodo, in Indonesia, which is clearly where they get their name. Wild Komodo Dragons prefer dry, hot climates such as open fields with tall trees, low tropical forests, and savannahs. You can also find them in dry river beds and beaches.

Just like all reptiles, they’re cold-blooded and have to get their body heat from the sun. So they’re more active during the day, although some move around during the night because they look for food at dawn. They’re solitary animals that only meet up with each other in order to mate or if they find a big hunk of food.

Komodo dragons are excellent swimmers and climbers. They can also balance on their hind legs to help them hunt. They use their claws to attack and dig dens, which they use to sleep and conserve heat for the nighttime.

They’re carnivorous animals that eat dead meat most of the time. However, they will occasionally ambush live prey.

They pull off huge chunks of meat from their prey and don’t chew them. They can even swallow prey whole if it’s smaller than a goat. This is because they can detach their jaw, they have a flexible skull, and their stomach can expand.

A komodo dragon can eat up to 80% of its body weight in one meal. This animal’s includes a wide variety of species such as snakes, birds, snails, mammals, fish, rodents, and insects.

Komodo dragons live around 50 years on average, so they become sexually mature around 9 or 10 years old. They mate in July and August and during that time of the year males fight for territory and females. The females themselves are hostile with their partners during this process because they literally attack by biting and scratching them.

They lay eggs in September, and they can actually mate again before the summer starts. Females dig den or use an abandoned bird nests to lay their eggs. They then cover them up with dirt and leaves and sit on top to protect the eggs over the six months while they incubate.

Up to the age of 1 year, baby Komodo Dragons live in trees to avoid predators, which include adult males. Once they’ve reached that age they can defend themselves and attack if necessary.

This animal might not breathe fire, but this truly is a fearsome dragon because they can inject deadly venom into its prey and even kill people.