The Monkey Mama that Cares for Dogs 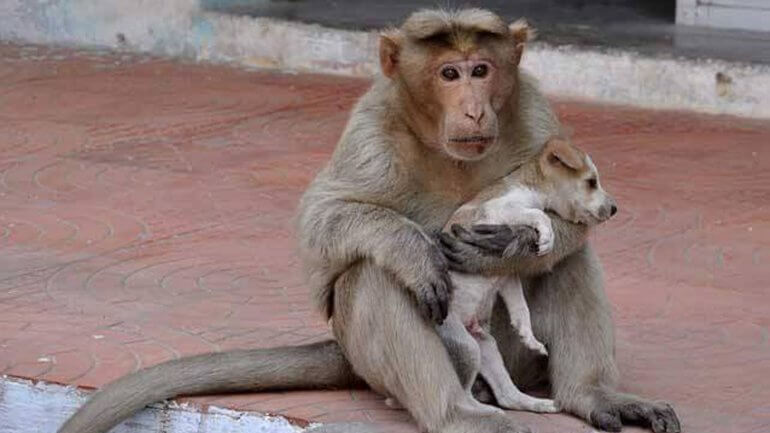 It’s common to hear or read stories about the relationship between two completely different species. And, at first, these stories might seem strange to us. For example, we have heard about ducks and dogs, cats and bears, hedgehogs and dogs, and more. Today, we’ll learn about a monkey that cares for dogs. Yep, that’s right! A proud monkey mama.

We say, mama or mother because the monkey that’s taking care of a dog is a female. For more information on this amazing tale, please watch the cute video at the end of this article. In the meantime, here’s the story.

History of the monkey mama

In truth, the rhesus macaque monkey takes cares for the dog for purely logical reasons. How? Consider the following. First, she lives in Africa with many of her own kind. And second, it’s a place where many dogs and pets are abandoned after birth.

As the story goes, the monkey mama lost her infant. We don’t know if it fell from the tree, got hurt, or exactly what happened. Of course, we know that losing a baby, whether animal or not, is very painful. Feelings are hard to explain and much less understand in this case. And it is, without a doubt, something that no one (human or animal) is ready to deal with.

Although the monkey mama fell into a deep depression after losing her infant, her mood changed when she found an abandoned puppy. Fate can sometimes deal an unexpected hand, and that’s exactly what happened. The monkey mama needed a baby and the puppy needed a mama. Case closed!

The monkey didn’t have much to think about. She simply picked up the dog and took the animal under her wing. Surprisingly, the puppy did not resist her attempts. And they have been spotted together several times in the neighborhood. The monkey even feeds the puppy. Imagine that! Basically, she’s caring for the puppy as she would her own infant.

She even cleans the dog and covers him with her arms when the puppy eats. Apparently, she’s afraid that someone will steal him. She also defends, feeds, and protects him. What a great mama! Don’t you agree? After all, what makes a wonderful mother? It is not the one who loves, protects, and cares for her children? Isn’t that what the monkey mama is doing with her puppy? Yes, they’re from different species, but you can’t deny that they’re family.

“Family” isn’t defined only by… blood. It’s defined by commitment and by love.” – Dave Willis

This story is an excellent example of impartial, self-sacrificing love, and something that we all should imitate. Isn’t it amazing how much we learn from animals each and every day?

Can animals of two different species be friends?

Some questions don’t really need an answer, and this is one of them but…yes! Two animals from two different species can be friends. More than friends, they can also be family, as we have seen in this beautiful story.

How is this possible? Simple! Animals are driven by instinct. You might be tempted to think that this means they don’t have feelings, but quite the contrary. They feel and share emotions much easier than we do without focusing on prejudice, racism, and other ugly ideas that separate people from each other.

Trust is especially important to both species. They don’t think about hurting each other. Instead, they value the good feelings that they can share together. Don’t you think we can learn a lot more from them? If you take a moment to meditate on the subject, I’m sure you’ll agree!

Source of the main image: www.infobae.com