The Vomeronasal Organ in Cats

It's thanks to this organ that cats can "taste" the air particles that they smell. 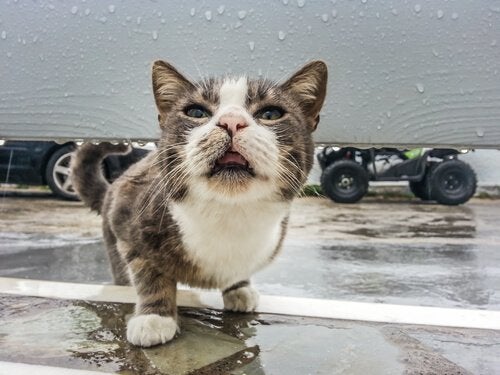 Cats have a much more acute sense of smell than humans. This sense is a vital part of how they communicate and interact with their environment. However, their nose isn’t the only tool they use to get to know their surroundings. Today on My Animals, you can learn about the vomeronasal organ in cats.

It’s also known as the Jacobson’s organ in honor of the scientist who discovered it. This sensory “tool” is in the vomer bone that’s located between the roof of the mouth and the nostrils. It splits off into two different “sacks” that allow air to come through them.

It’s basically a secondary smell organ that a lot of vertebrates have. It helps them detect specific chemical compounds. Having this organ often plays an important role in hunting and reproduction.

Humans also have this organ, but it’s still unclear whether or not we use it. This organ allows cats to “taste” the particles that their nose (not their mouth) picks up in the air.

The vomeronasal organ in cats is located between their two upper incisors. It’s what gives them the ability to “taste smells.” This sensory organ is part of what makes it possible for them to pick up on smells that humans can never precieve.

Cats and their amazing sense of smell

Cats have an olfactory system that makes it possible for them to pick up on smells that humans can’t. For example, they can detect pheromones, chemical substances that transmit information between animals of the same species.

They pick up on these through their olfactory mucosa and their vomeronasal organ. However, pheromones aren’t the only thing that they can decode with this amazing tool.

It’s also how they analyze new, strong smells (like bleach) related to food or sex. They can even tell if a female is in heat just by smelling her urine.

How the vomeronasal organ works in cats

If you’re observant, you’ve probably noticed that your cat makes strange faces every once in a while. They do this by opening their mouths and breathing through the upper part of it and following through with their lips. Then they wrinkle their nose and raise their head at the same time.

This series of actions is called the flehmen response. It’s a biological reaction that closes the normal breathing passageways for a second so that air will go through the vomeronasal organ instead.

So, if your cat picks up on certain air molecules, they grab onto them with the receptors on their tongue. Then the smell passes through the opening in the vomeronasal organ when they push their tongue against the roof of their mouth. They might ever move their tongue around to help them get an even better sense of the particle.

Additional information about the about the vomeronasal organ in cats

There are different neural pathways for smells picked up by the nose and vomeronasal organ in cats. With the nose, the sensory information is carried to the cognitive areas of the brain. With the vomeronasal organ, the smell passes to the hypothalamus and the amygdala.

More specifically, it goes to areas related to emotional reactions that are connected to sex, social interaction, food, and self-defense. Pheromones the vomeronasal organ picks up on can also change slower, more long-lasting physiological changes.

So, if your little meowing friend has a flehmen response, just by reading this article you will have a better idea of why it does some of the things that you could never figure out before. The vomeronasal organ is the answer.