They Didn't Know it Was an Animal Until They Cleaned it 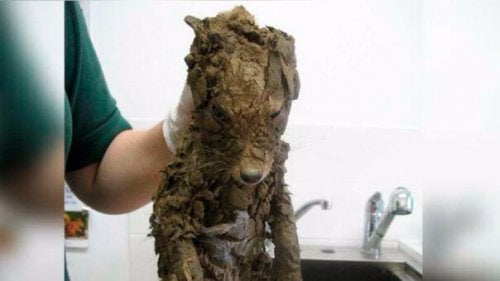 There are many animals that do not live with people. However—thanks to their instinct—they are able to feed themselves and stay alive. On occasions, many animals experience dangers that we can’t even imagine. Maybe we’ve never thought about it but when cases such as the one we will share today happen, we become more aware of the situation. What was this rescued animal?

An unidentified animal was found in a mud pit in such a bad state that no one could tell what species it was.

What is this mysterious animal covered in mud?

While they were working, some masons in London, realized that an animal was trapped in a mud pit. They didn’t know what had happened but these brave men rescued the creature without delay.

When they took the animal out, it was completely covered in mud and impossible to identify. The only thing that seemed certain was that it was a mammal of some kind. This reassured the men. At least it wasn’t a snake!

Being in these conditions could have caused hypothermia or asphyxiation for the poor rescued animal, resulting in death. The masons knew they needed to act without delay, so they left what they were doing and quickly went to the nearest veterinary hospital, South Essex.

The first thing that the professionals did was bathe the rescued animal. Then they discovered who the new tenant of the hospital really was. It was a beautiful red fox cub. Without being covered mud, it looked precious. However, the vet tested the fox because they didn’t know how long it had been trapped in the mud.

After several tests, everything appeared to be all right although Mudssey—as the hospital named him—was very weak. So, they kept him hospitalized.

Being in a hole covered in mud is something very harmful for the health. Let alone the effort required to move about under the weight of the mud. So Mudssey spend a few days at the hospital to rest and feed himself and to recover 100% of his strength.

In a just a few days, when Mudssey was better, he was transferred to his habitat. The staff was confident that he was no longer sick. This was excellent work not just by the masons, but also by the members of the hospital.

Mudssey is not the only rescued animal

Mudssey is no exception. He is just one of the many dogs and other animals that have been rescued from dangerous situations. Here is a reminder of some others:

Source of the images: www.capital.com.pe