Tips For Approaching A Frightened Dog

You should always remember that a frightened dog can become aggressive out of insecurity. If the animal feels cornered, it may attack. 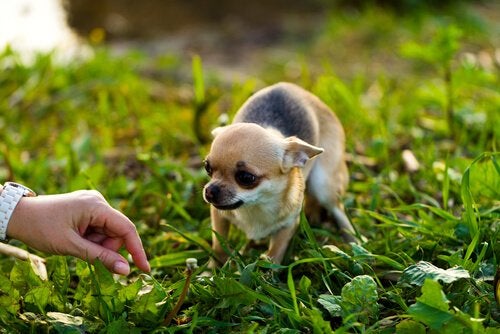 Have you ever tried to pet a dog that runs away from your hand? There are several reasons why dogs run away. However, most of the time it all about the dog’s personality. Approaching a frightened dog takes a lot of patience, calm energy, and determination.

One thing you should keep in mind is that frightened dogs aren’t only abandoned animals. All dogs can become frightened, but some are more naturally fearful. For many owners, this can be a problem when it comes to socializing their pet. In such cases, you can use these tips that can help you approach a frightened dog.

Why do dogs get scared?

Like human beings, dogs have different personalities and are unique individuals. To help better understand dogs, trainers have created the terms “dominant” and “submissive”, which can help you figure out your dog’s personality.

Frightened or fearful dogs usually fall into the submissive category. In packs, submissive dogs usually are the followers of the alpha dog or leaders of the pack. Due to this personality type, some individuals may be more aggressive or timid than others.

When you want to approach a frightened dog, you can’t act in the same way you would with a normal dog. Frightened dogs can become more aggressive if they feel like their lives are in danger.

To see whether a dog is frightened or not, you just need to read their body language. When dogs lift up their tail, show their teeth, or partially close their eyes, then those are obvious signs of aggression. If you see this type of body language, you should back away immediately.

Approaching an animal greatly influences how it will react. What does this exactly mean? You shouldn’t treat a frightened dog the same way you would treat a normal, unfrightened dog. If you want to approach a frightened dog, then you should do it very slowly and calmly, in order to prevent disturbing or provoking them.

How to Approach a Frightened Dog

Always remaining calm is the key to approaching a frightened dog. Dogs are able to feel when someone is nervous, which can make the dog nervous and end up reacting aggressively.

Another recommendation is to act as if the dog isn’t there. One of the most common mistakes when approaching a scared animal is to look at them into the eyes or accidentally come across as if you were dominant. This causes the dog to feel cornered and he could resort to violence as a means of defense.

Approach with smooth, slow, and light steps without looking too much at their exact position. Let the dog know you are not a threat to him and that you are friendly. Some trainers recommend talking to the dog is a soft voice because it can help reassure the animal and let them know that you won’t hurt them.

Also. bring yourself down to the height of the dog to prevent them from feeling overwhelmed by your height. Due to being so much taller than the dog, your size can frighten the animal and come across as a symbol of an imposition to them.

What to do if a dog runs away out of fear?

The best advice out there is to not pursue them. They will think you are chasing them and want to hurt them. In addition, running could lead the dog into an area where they feel cornered. When you follow them, this could cause them to become aggressive as a way to avoid you.

If trying to approach a frightened dog sparks aggression, then there are two options you can follow. The first is to stop approaching the dog and leave him alone.

Remember that your safety is first. It’s not worth contracting diseases such as tetanus or even losing a finger because of a dog bite. The second option is to be resilient in your mission.

Although the dog continues to show clear signs of aggression (showing teeth, arched back, growling or barking), you can still continue using a friendly and calm approach. You should take extra care of yourself to prevent getting bitten. No matter what, patience is the key to success. With luck, you might succeed and have a nice friend or, perhaps, a new family member.

Other Recommendations When Approaching a Frightened Dog