Tips for Taking Great Pictures of Your Dog

Sometimes taking pictures of your dog is more complicated than it seems because dogs don't stay still. If you are trying to take a picture of one, there is no need to force him to remain still because you are better off waiting for the animal to calm down. 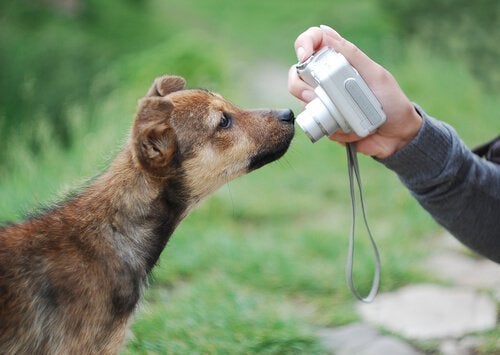 Maybe you’ve taught your pet some tricks like fetching a ball or shaking hands, but you can’t get him to stay still for a selfie or to show off what he’s doing on social media. So, if this is happening to you, then read this article to learn how to take great pictures of your dog. Don’t miss out!

Tips for taking great pictures of your dog

Everyone loves their pets and wants to show them off all the time; when they go to the park, when they make a new friend or while going on vacation. But the pictures don’t always come out how you want them to. Most likely you want them to be as artsy as all of the ones on Pinterest.

Sometimes it even seems like our best friend is determined to ruin the photo shoot because he won’t stay still, he sticks his nose in the camera and pays no attention to you as you want him to, among other things. In order to prevent these common problems (keeping in mind that he is an animal), you can look at some tips on taking great pictures of dogs below.

A treat, a ball, a toy…you know what your pet likes best. It’s a great way to get your dog to pay attention to the camera and to stay still. If you have someone next to you, they can help by holding the prize.

The objective is to get your pet’s attention, so some owners make certain noises that won’t bother them in order to get them to look into the camera. For example, hitting an object, squeezing a toy that makes sounds, etc.

3. Trying to get the best angle

One of the most common mistakes when taking pictures of pets is doing it from a human angle, for example, standing up. So, remember that they see the world differently, a little lower.

To make your pictures more professional, don’t keep asking your dog to look at you. Just put yourself at ground level and approach him from his perspective. Try it out!

Another trick for taking good pictures of your dog is the lighting. Without knowing much about photography, it’s as easy as going to the park or the garden instead of staying at home. Likewise, if you want to take pictures at home, open up the curtains and wait until it gets sunny. It’s always better to take them in the morning or early in the afternoon.

Don’t use the flash on your camera because it can hurt your dog’s eyes. The next time you take a picture, think about the last time you blinded by using the flash. Also, the flash will give your dog red-eye in the picture.

You can use a blanket that contrasts with your pet’s fur, allow him to climb up on the sofa, leave a white wall as the background, and wait for him to get close to some flowers…You want the background to be solid so the picture looks more professional.

Surely you know what your dog likes and what he doesn’t. Take advantage of his personality and habits in order to take better pictures. For example, if he loves water (like golden retrievers) or sleeps all day (like Saint Bernards), the most authentic photos will be taken when he is playing in a pond or pool.

Wait for the perfect moment to take the picture. For example, just at the moment when someone he loves enters the home, while he’s waiting for his food, during his morning walk, when he’s taking a bath or while he’s playing fetch.

Remember that your pet doesn’t understand why you want him to stay still or to make a certain movement when you are holding something in front of him. He doesn’t know what a camera or a selfie is! So, it’s always best to catch him off guard, not to force a pose, wait for him to fall asleep or to be calmly looking out the window.

You an also take advantage of the times they are playing games (when you aren’t watching), either by himself or with other pets, to take a very casual picture that won’t frighten him at all.