These hunting dogs have a great sense of smell, which helps them detect their prey. 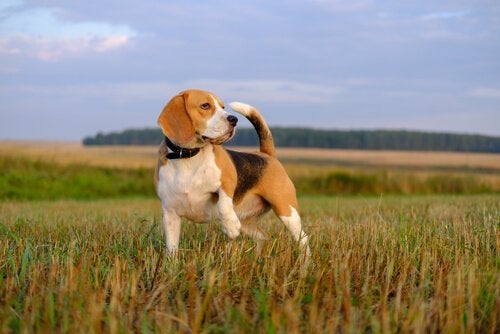 Among hunting dog breeds, there are hounds who have a more developed sense of smell. These tracking dogs can come in different sizes and are used as rescue dogs.  Continue reading to know more about these tracking dogs!

As their name suggests, people generally use tracking dogs to sniff around and track prey or animals. Although each breed is identified by their ability to use their nose to detect food or danger, these hounds also have some similar traits. One trait is their elongated snout.

When talking about tracking dogs, it’s normal to mention Beagles. These medium to small-sized dogs are good at tracking hares and rabbit due to its sense of smell and tracking instinct.

Although the beagle — in the picture above — has existed for thousands of years, it was raised and bred in England as a field dog ever since the sixteenth century. It’s related to the Elizabethan era because the queen was a big fan of this breed.

This is another of the most famous breeds of tracking dogs. Basset hounds are known for their short legs, long ears, elongated bodies, and highly developed sense of smell. These dogs were bred in France at the end of the 19th century and they are a mix of an English dog and a bloodhound. This breed soon became a favorite among the noble classes.

Basset hounds are calm, friendly, and are somewhat stubborn. They are also loyal, affectionate, and playful, especially around children. This breed loves to spend hours sleeping, eating, and tneds to be lazy. If owners don’t walk them enough, they can become overweight.

The Bloodhound is one of the largest tracking dogs. They have the most developed sense of smell. There are known cases that a bloodhound has been able to follow 15-day-old traces. Police in several countries use them as tracking dogs.

People also call this breed the”dog of Saint Hubert” due to the belief that these hounds are descendants from dogs a monastery in Belguim with the same name. Bloodhounds are several hunting breeds crossed together. King Guillermo brought them to England. These tracking dogs have large heads with wrinkles, droopy ears, short brown or black hair, and sturdy bodies and legs.

Very similar to the beagle, although slightly taller, English Foxhounds descend from Bloodhounds. Their main function is to accompany hunters mounted on horseback. This breed has great stamina because they can walk for miles without tiring.

These dogs are not common pets. They prefer to be in packs with several dogs. Among their physical characteristics, we can highlight its short, tricolor coat (white, black, and brown), droopy ears, and weight of about 40 kilos at most.

The last dog on this list is of French origin. You can hardly ever see these dogs outside of France. However, this is one of the six types of Basset Hounds that are internationally recognized.

The Blue Gascony Bassey has short legs, an elongated body, long tail, and medium-length ears that droop from the sides of its head. It’s known for being blue due to its coat has a very unique appearance. This is a very similar breed to the small Blue Gascony Hound, which is taller than the Basset and has more longer legs.