What animals can't Live together? 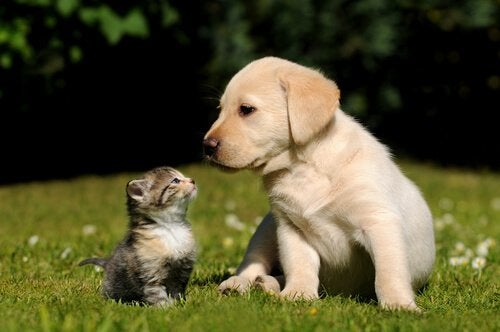 “They get along like a cats and a dogs”. Have you ever heard someone say something like that before? We really don’t know where this concept came from, but there are some people who have a cat and dog living at their home and they have no problems with them whatsoever. Is it true that some animals can’t live together? If so, let’s continue reading to see if it’s true.

Certain Animals Can’t Live Together, Or Can They?

It’s true that each species has its own traits and personality, as well as different needs, but that doesn’t mean that some animals can’t live together. Think about humans, although we’re essentially the same, we all differ in so many ways. Things that are important for one person may not be so much for another.

However, we’re used to sharing our lives with other people, living together and happily. Although it really often requires communication and being reasonable. No matter what, it’s a question of chemistry. Animals also share some sort of chemistry, and this can mean that certain types of animals are better suited to living together.

Dogs and Cats: Yes or No?

Dogs are very sociable animals and can live with almost any other species. Although it’s true that cats and dogs are very different, they can live under the same roof without having any problems if you follow a few guidelines.

The owners need to make an effort for the two animals to form a friendship. You can achieve this by not forcing them to spend time near each other by making sure you tend to their needs equally, and also talk to them in the same manner.

It’s true that what will most determine whether certain animals can’t live together will be each animal’s personality, as well as your commitment to ensuring that they get along well. Make sure you give both of them their own space.

Dogs and Ferrets: Yes or No?

Ferrets actually seem to get along the best with dogs, since they share a lot of things in common. They’re both sociable and need to feel part of a group or pack. Also, ferrets love to go out into the street for walks, so both animals can enjoy these moments together.

How about Dogs and Rabbits?

Rabbits are very playful animals and can sometimes be very entertaining when they are with dogs. However, you need to choose the right breed of rabbit, because some breeds are very nervous and could get stressed out or upset by the dog.

Socialization is very important for rabbits just as much as it is for dogs if you want them to happily live together.

Rodents such as hamsters or guinea pigs can live under the same roof but they won’t be friends. They’ll be happy and relaxed living together, but they’ll be distant. So, neither of the two will find the other remotely interesting aside from knowing that they’re there. There won’t be any kind of interaction between them.

They’re too different to develop a relationship. Just like with rodents, dogs won’t interact with birds except in exceptional cases. This tends to happen when they’ve grown up together and feel like siblings.

What Animals Can Cats Live With?

Cats are much more complicated than dogs in regard to living with other species because they’re very territorial and independent. However, as mentioned earlier, it all depends on each animal’s personality and age.

The best way for cats to live alongside other animals is for the two animals to grow up together and interact with each other as of a very young. This way they’ll get used to each other quickly and consider each other as another family member.

There are no pets which definitely can’t get along and live happily together. With each individual animal, there may or may not be any chemistry, just like people. Plus, just as if they were people, you can’t force these animals to get along.

Interesting Articles
Curiosities
5 Values You Can Learn from Animals