What to teach a dog according to their age 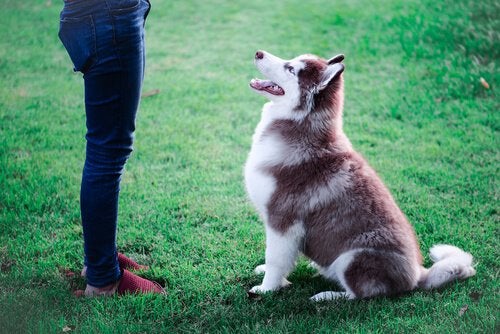 When people adopt a dog, everyone wants them to know already how to go to the toilet, come when their name is called, not pull on the lead, shake paws, and myriad other things besides. In their obsession to achieve this they might overwhelm the dog, wanting to teach it everything at the same time, believing that the sooner they learn, the better.

However, it’s important to bear in mind that a puppy is like a small child. You can’t teach a child to talk before they’re ready. Puppies also need to learn at their own pace and need the right time to learn each thing. But how can we know when that is?

In My Animals we’ve prepared a guide for you, so that you can know what you should teach your dog at each stage of its life.

Guide for training your dog according to its age

Let’s look at what you can teach your dog according to its age:

Although many people believe that you need to wait a long time to train a dog, this isn’t true. In fact, when they’re puppies is the best time to begin learning certain things. Obviously, we’re not going to teach them to shake their paw, for example, but there are other important things.

These small important things will make living with a dog easier. They’ll also introduce your newborn pup to the world or learning and obedience. These lessons could be: doing its business in the same place, being left at home alone without destroying the place, not biting, and respecting other people’s things.

This is the recommended age to start going outside for walks on the streets. As a result, before this happens, it would be good for the dog to learn to come when called. But also to be calm and walk by your side, not in front, nor behind.

Furthermore, before going out in the streets it would be good for them to be comfortable on a leash. If you try to take them out on a leash when they’re not used to it, they’ll probably want to remove it and will refuse to walk. Or worse, they’ll learn to get themselves off the leash and have an accident. How do you teach them?

At home. Put the leash on them even though you’re not going out. As they’re young, it’s recommended that you use a harness to stop them tugging and damaging their neck. You could put the lead on at home so that they get used to it and that way, when you finally go out into the street, they won’t see it as a problem.

Between six and eight months

At this age, their brain is already well-developed to understand any type of instruction. This is the ideal moment to begin teaching your dog all those things that you’ve wanted to teach them to do. For example, you could teach them to shake paws, or to sit or stand. You could even teach them to fetch, drop, or anything else you can think of. You can do all of this as long as you use positive reinforcement and a great deal of patience.

Some tips for training

Like anything in teaching, the process or training a dog has its steps and a particular way of doing things.

Above all, remember to train your dog at the correct pace for their age. Don’t go too far ahead or lag behind. Each lesson has its moment. And of course, you don’t achieve anything with scolding or shouting. You need a big dose or love, patience, perseverance and affection. These qualities, coupled with positive reinforcement, always work.