What You Should Know About Catfights

The fact that cats are territorial and jealous animals, it's normal to see them getting into fights. Sometimes, a fight can be caused by a dispute over a female. 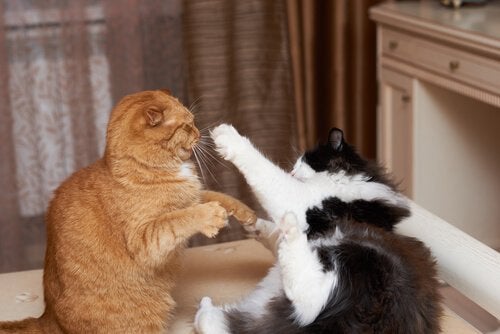 If you have more than one cat at home, then you already that not everything peace and love between the two of them. There nothing odd seeing them get into fights with each other as if they were tough street cats. Read on if you have ever wondered why catfights are something normal between this species.

Why do cats fight?

We know that felis catus is a very territorial animal. The main reason why most cats get into fights with each other is due to jealousy. Cats also fight out of self-defense when they feel threatened or usually two non-neutered will fight over a female in heat.

Sometimes it’s difficult for humans to understand what is the specific cause of a catfight because they normally start out of nowhere, they finish almost as quickly as they started, and afterward, everything goes back to normal as if it never happened.

However, sometimes, some fights can get pretty serious and the cats can get injured, especially if you intervene. Sometimes they get so intense they hold grudges against each that last several days.

Continue reading to find out some of the reasons why cats get into fights with each other and what’s the best way to stop a catfight.

A new pet can cause a dispute

If you already have a cat and you bring another one home, you will probably have to deal with a catfight upon their arrival. It’s quite normal to see cats rejecting their new feline family in the beginning, but this all depends on each cat’s personality.

In such cases, it’s important to make sure your old cat doesn’t feel threatened by the arrival of a new cat into the home. At the same time, you need to give your new pet his own space so they can adapt without feeling stressed.

Therefore, the best thing to do in the beginning is to make sure the two cats don’t have to share food or water bowls. The same goes for their litter box, beds, or toys.

Other causes for catfights

Fights between your cats will be inevitable (and possibly violent), particularly if you have a couple of males and female and none of them have been neutered.

The only way the peace will come back into your home is by getting your cats fixed. This is especially good because you wouldn’t have to be dealing with unexpected litters of kittens.

On the other hand, if your cat feels trapped or threatened, they may become aggressive and may even attack you if you try to touch them. In such a situation, it’s best to wait for your cat to calm down and try to figure out what is upsetting them.

Some things which can cause this reaction include the presence of strange people or animals. Cats can also get scared by sudden movements or changes in the home, including loud noises or strange smells.

To prevent your cats from fighting each other, it’s also important to treat them both equally. If your cats feel jealous of each other, then most likely they will end up getting into a fight.

In general, if your cats start fighting, don’t step in to intervene and separate them. As much as you love them, in situations like this, it’s quite likely that you’ll end up getting scratched or bitten by your beloved pets.

The best way to stop the fight is by distracting them by diverting their attention on something else. Shouting or another sound, like hitting an object, can be very effective. Once the fight is over, don’t scold your cats. It won’t make things any better. In fact, it might make things even worse.

It’s normal for cats to growl or hiss, or even have a short fight. The important thing is for you to pay attention so they don’t become serious fights that can leave a cat injured. If they do get into catfights, then you need to manage the situation and keep them separated until things are calmer.

If aggression between your cats persists or becomes very violent, you should talk to your vet or an animal behavior specialist.